Italy – A "scoop" for the month of Fr Rua 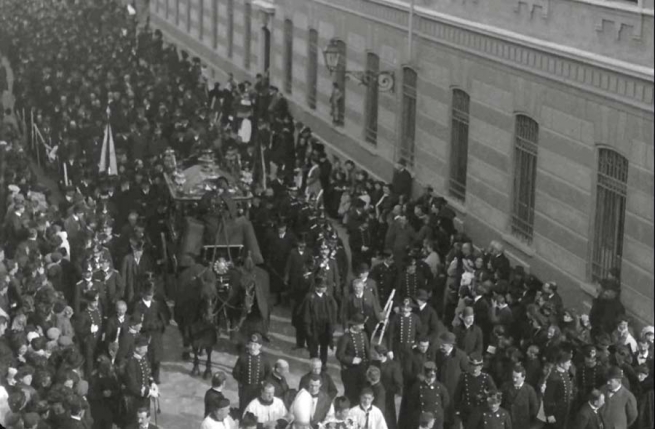 (ANS - Turin) - It would be hard to believe: a Salesian film from 110 years ago! No, it is not fake news, but a real scoop. From the Salesian "photographic" archives, entrusted to the Turin Cinema Museum and the National Corporate Cinema Archive - CSC for their restoration, a first delicacy has recently emerged: a silent motion picture, in black and white, lasting eight minutes which films the salient moments of Fr Michele Rua's funeral (6-9 April 1910). All made via the good and intelligent positioning of the camera in various places in Valdocco, in Piazza Maria Ausiliatrice, and the neighborhood. To watch, connect to the Vimeo address below to see Fr Rua's grand funeral, and those three unforgettable days in Turin.

Don Bosco's in 1888 had been a memorable funeral, so universal was the fame of his holiness; but Fr Rua's was equally so, as one can see from the film, more eloquent than many words. The small rooms of Don Bosco and then of Fr Rua, the various churches of Valdocco, the adjoining arcades of the time, the courtyards, the entrance, as well as the many figures and faces of the very first Salesians all speak for themselves: Fr Filippo Rinaldi in priestly vestments, next to him the Secretary of the Superior Chapter (the famous Fr Giovani Battista Lemoyne), the Councilors Fr Barberis, Fr Albera, Fr Cerruti, Fr Piscetta, Fr Francesia, and many other early Salesians. They accompany their second father, Fr Rua, the one who had gone halfway with Don Bosco and who had now joined him in Heaven, to the church of Mary Help of Christians for the solemn funeral.

We see the funeral procession through the adjacent streets and back to the church: young people with musical bands, associations and brotherhoods, clergy, nobles, notables, authorities, five bishops, Superiors, ecclesiastical and lay past pupils and an incalculable crowd of people which form a wing especially along the alley of viale Regina Margherita. If the images wobble due to the technique of the time, the film is movement in itself: the carriage of Princess Letizia of Savoy leaving Valdocco greeted by the most authoritative Salesians, the pedestrians crossing via Regina Margherita to pay homage to the passage of the coffin, horse-drawn carriages that come and go, cars and trams. A wonderful and ongoing snapshot of a sunny afternoon on Turin in April 1910, which is completed when the coffin, the next day, is buried in the niche on the right wall of Don Bosco's tomb in Valsalice, awaiting ascent on the altars.

If the city of Turin acknowledged him not only as one of its illustrious fellow citizens but also as a worthy successor of Don Bosco, capable of maintaining the reputation of the Salesian work unaltered, all that remains is to express great admiration and gratitude to the Salesians of the time for their foresight in having promoted these images, which have now come down to us. At the dawn of cinema they were indeed "in the vanguard of progress".

The video is available here