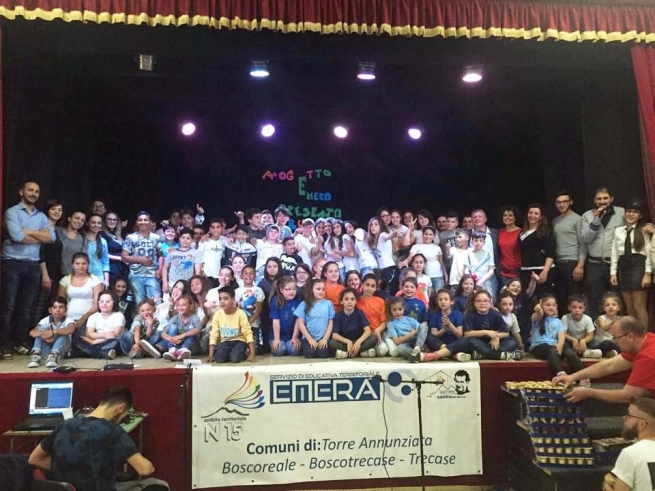 (ANS - Torre Annunziata) – The Emera project caters for one hundred and thirty children between 6 and 17 years, including 11 ethnic Roma and 6 young people who had dropped out of school for more than a year and are being prepared for eighth grade. There is a large team of educators, including five young people doing Civil Service and 6 teenagers on probation, sent by the Juvenile Justice Centre, who have joined their younger companions. These are some of the numbers of the Emera project run by the Salesian "Small Steps Big Dreams" Association and supported by Social Ambit no.30, which includes the areas of Torre Annunziata, Boscoreale, Boscotrecase and Trecase.

For seven months these young people have been supported in their studies and have engaged in recycling workshops and pottery, football, volleyball, handicrafts and painting on glass.

On the final day of the fiscal year, on 24 May, the young people became actors, choreographers, set designers, dancers, and singers in the show "Guys in trouble", staged at the Salesian theatre. These are young people at risk from Boscoreale, the district prisons of Torre Annunziata and other areas.

After the show Fr Antonio Carbone, president of the "Small Steps Big Dreams" Association which runs the project, thanked the municipal institutions that support the project and recalled the other educational initiatives undertaken by the association, such as the "disarm the city" rally on 20 March.

The mayor of Torre Annunziata, Joshua Starita, greeted the young people and their families warmly. He said that "our cities believe in them and it is a duty on the part of the state to give equal opportunities in life to all citizens, particularly young people.