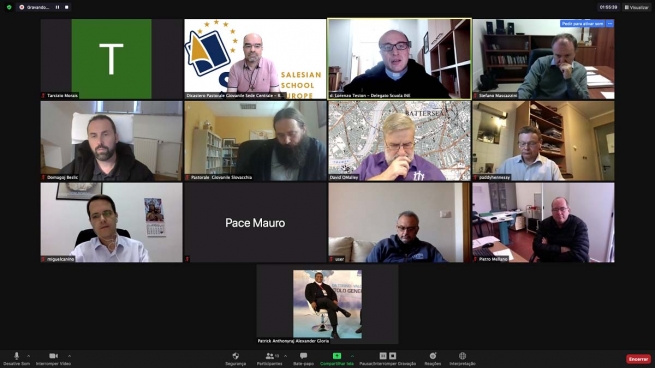 (ANS - Catania) - On Monday 28 September the Rector Major, Fr Ángel Fernández Artime, participated via the "Zoom" platform in the meeting of the Mediterranean Region and the Iberian Conference, physically held in Sicily, from 28 to 29 September. Other Salesian representatives from Spain, Portugal and the Middle East also participated in videoconference.

The dialogue with the Rector Major served to share the guidelines of the Congregation for the 2020-2026 term, necessary to guide the work of all the Provinces. On the occasion, the X Successor of Don Bosco also presented the 28th General Chapter's final document, soon to be published.

Subsequently, Fr Fabio Attard, who after two six-year terms as General Councilor for Youth Ministry was appointed last May as Head of Ongoing Formation of Salesians and lay people in Europe, presented a document concerning his new duties.

The meeting of the Iberian Conference took place on the second day of work, this time through the “Google Meet” platform. The appointment served to create a discussion on some issues relating to Salesian formation.

The ongoing formation course in El Campello was scheduled from 13 April to 13 May 2021, and the Iberian formation project and the regulation of an Iberian formation commission were presented. Other debates focused on other issues, such as the Salesian presence in the social media, with special reference to the intention to spread the Salesian vision on issues related to youth, education and the family.

Several proposals for collaboration at the level of youth ministry occupied the final part of this meeting, which takes place every six months.