Argentina – Always cheerful: boys and girls accompany other young people in the name of humor 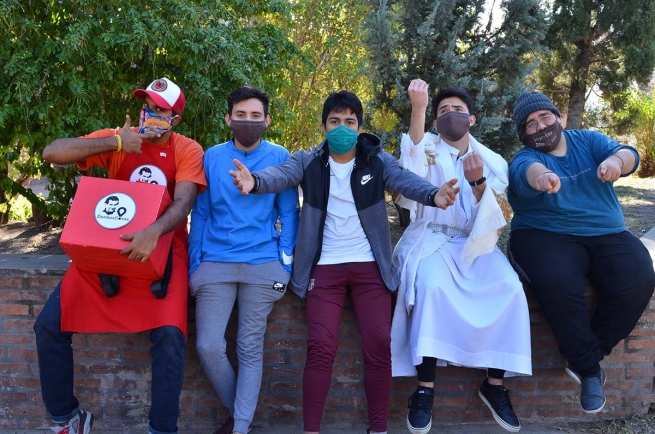 (ANS - Rosario) - Each group of the Salesian Youth Movement (SYM) in Argentina has had to upset the normal course of its activities due to the pandemic. Camps, oratories, meetings, rallies, retreats… could not take place. Yet, a group of boys and girls from the SYM of Rosario managed to generate closeness even in this period, through humor.

The idea emerged as an option to accompany each other in times of isolation, claiming Salesian optimism and joy. In full compliance with the health regulations on social distancing, various audiovisual productions were made in an attempt to make quarantine more enjoyable.

In this perspective, a first video was produced which then led to other productions shared on the Instagram profiles of the various SYM groups. The “Don Boscosas” kit was the main theme of this audiovisual that made everyone laugh.

“It all started with the idea of ​​making a video for all children who, due to the pandemic, could not go to their oratories or groups,” explains Franco, of the oratory "Virgen de Caacupé ", one of the creators of the initiative. “The idea of ​​the video was to show everything we lack in those places and to trigger an identification mechanism. And I also believe that humor and joy are the most subtle and effective way to give a message and make the development of any project much more fun and bearable.”

“It all started with the need to bring the playground to children in these times of isolation; to encourage them and accompany them with a little humor,” said Ezequiel, another animator. While Martín adds: “I think we can say that we have achieved this objective.”

“I think that the joy of the charism is a beautiful tool that helps us to perceive that God is at the center of everything. It helps us to be a reflection of that love that God has for us and makes us appreciate the things we have, it makes us more grateful,” reflects Gaston, a trainee from San Juan who accompanies the work groups.

What began as a form of accompaniment for the young people of Rosario ended up having repercussions in other parts of the country and this is how humorous messages arrived from Formosa, Buenos Aires, Salta, Entre Rios, Santiago del Estero ...

Speaking of the experience with the young people of the group, Gastón also points out that “it helped us to understand that we can increase the confidence and self-esteem of each, to be more responsible with the commitment of the project undertaken and to explore new ways to express ourselves, since the children not only had to plan and write the videos, but also act them, sing and improvise.”

“I think it helped me a lot to bond with others and learn to work as a team with the kids,” he concludes.