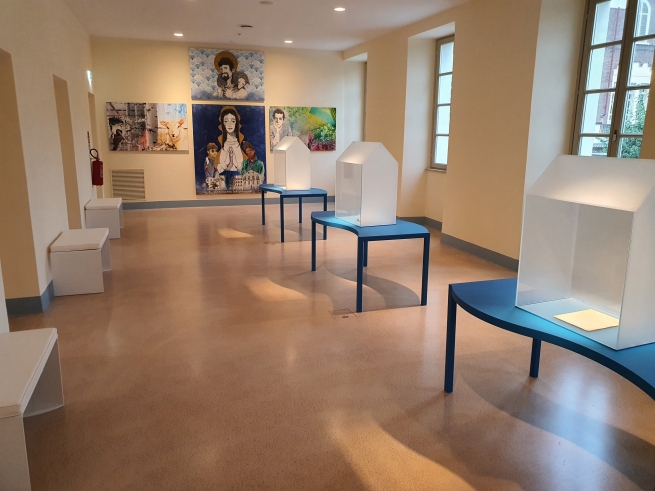 (ANS - Turin) - The Casa Don Bosco Museum recently inaugurated in Turin does not limit itself to collecting artifacts and relics of great value from Salesian history: at the same time, it offers a journey dense with meaning. The Youth Ministry room is part of this itinerary that speaks everywhere of the Preventive System. It is presented to us by Fr Miguel Angel García, General Councilor for Youth Ministry.

The dream of the nine-year-old (1824): wild animals, young people in prisons where violence generates violence, they become lambs. “Here is the field where you have to work”. In the center, Giovannino Bosco receives the magical words of his Preventive System that will illuminate the educational-pastoral action: not with thrashings, but through the power of love. As in all his dreams, the Lady dressed as a shepherdess appears, promised by Jesus: “I will give you the Teacher”.

On the central panel, the dream of 1844: the transfer of the Oratory into the courtyard with the arcades. "The uncertainty about the place, the means and the people made me worry. I went to sleep with a restless heart”. The churches of dreams (Pinardi chapel and San Francesco di Sales church) welcomed hundreds of young people. These places and Don Bosco's presence among them are engraved in their gaze. Always the blue and the stars reminders of his dreams: stars in the night that will mark his life and show him the way.

In the thick of the woods, in the midst of valleys, roads and footpaths, Don Bosco's missionary dream at the end of his life traces the mission journey of the Congregation (1886). Those lambs are now shepherds. His young missionaries faced "immense distances and difficult places". The saint looks ahead and remembers the words of the Lady of the Childhood Dream: “in due time you will understand everything”. His arm extends into the lives of many young people who go to all regions, a map without borders, from Valparaíso to Beijing.

In the windows, original texts:

The Dream of the nine years, collected in the notebooks of the Memoirs of the Oratory (manuscript written between 1873 and 1875): his more than 150 dreams express the charismatic strength and support the great projects of Don Bosco. Some refer to the saint's spiritual journey; others to the birth of the Congregation and to the profile of the Salesians; others convey important educational messages.

The Letter from Rome (1884), addressed to the Salesian community of Turin-Valdocco: a fundamental document of Don Bosco to ensure and protect the genuine survival of his educational style. It is one of Don Bosco's most effective and richest pedagogical documents and expresses his insistence on family-style pedagogy, the climate of affection, respect, presence among young people and original trust.

The Companion of Youth (1847): The first edition of this practical manual of instructions and prayers, published by Don Bosco (in 1888 he launched the 118th edition). It is a pedagogical tool in which he outlines a practical exercise of Christian life for young people.

Don Bosco wanted to strengthen the sense of a God who provides, is present, active and merciful in the Oratory.