Great Britain – “Battersea Angels”: Helping neighbours get back on their feet in a time of crisis 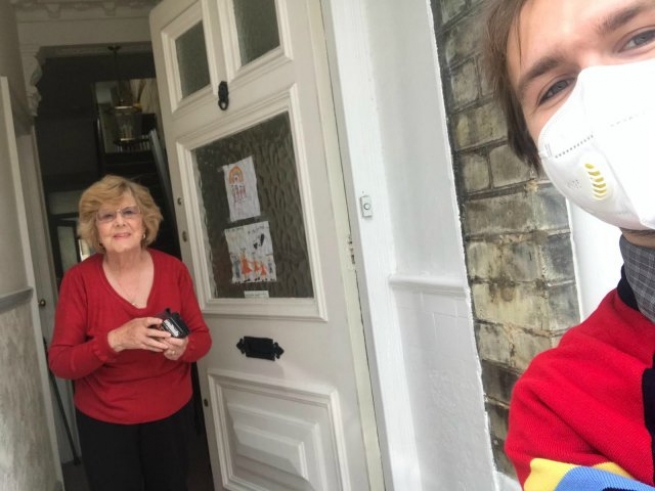 (ANS – London) – Fr David O'Malley, SDB, has spent the past months working in a community project, initially inspired by the Salesian parishes of Sacred Heart and the Church of England parish of St Mary's Battersea. Efforts were already being made to reach out to people in the local area and rebuild a sense of community and trust in a rapidly-changing area, but when lockdown hit, more community groups and volunteers soon joined them in supporting people who were isolated. With recent relaxations to COVID guidance, followed by further restrictions, the project is being reassessed to meet current needs. Fr David writes about his experience of being 'an Angel' in the past 6 months.

The Salesians in Battersea have combined with St Mary's Anglican Church and the Katherine Low Settlement to create "Battersea Angels." It is a network of over 400 volunteers in South West London who are ready to respond to their neighbours with the basic needs of food shopping, prescription collection, dog walking and befriending.

It has been a remarkable experience of a reservoir of hope and good will beneath the surface of a busy and sometimes impersonal part of London. Over the last six months, thousands of hours have been dedicated to supporting people who are shielding, or who have no money. So yes, we have also been buying shopping for some families who have slipped between the safety net of universal credit and a full-time income. It has not been easy. Many of the people we have served do not want handouts, but they need to have food for their family. Our Angels have had to work very sensitively with people who are feeling vulnerable and sometimes abandoned by the patterns of life they once knew. Angels were able to talk to them on the phone, listen to their needs and respond in a practical way with some down to earth socially-distanced contact.

Feedback has been incredibly positive. People did feel supported and were grateful for what we could do. However, they did not become dependent. Almost all those we helped have now been able to stand on their own feet and manage their lives again. They were good people, having a hard time and were helped in a way that preserved their dignity and independence. Some of the press like to talk about people who are spongers, cheating the system, but we did not come across any of them in the thousands of interactions we have had in the last six months. Most people have a quiet dignity, they want to manage their lives and we felt privileged to help them through an unstable time.

The experience of being an Angel has been interesting. It seems to have made our neighbourhood transparent. Usually, we travel around and notice houses and flats with the lights on in the evening and it all looks anonymous. Now we know that behind those lighted windows are families that are living close to the edge financially. Couples that are carrying complex health issues. Young parents who are unable to work or to properly care for their children. Suddenly, our neighbourhood looks different and we now know the depth of need behind closed doors. We recognise the quiet heroism of ordinary people who are just getting by and yet staying cheerful and optimistic. Many of us encountered situations that left us thinking 'how would I cope with their situation?' and came away not sad but full of admiration for the dignity and courage we found.

For the volunteers, all four hundred of us were actually the beneficiaries of this Angel experience. It drew out of us qualities that perhaps had laid dormant in the ordinary pattern of life: things like compassion, gratitude for our own stable situation, a sense of justice, a deeper faith in the goodness of humanity and a more grounded sense of priorities in life. But above all else, the experience raised an awareness of the possibility of a different sense of community in our area. Perhaps we can trust people more. Despite the media we consume, perhaps everyone is not out to get us. Perhaps we can let some of that fear of the stranger go and take the risk of smiling, saying hello, reaching out a hand in a wave.

We don't know how things will develop in the future for Angels. We have seen a dramatic fall in the emergency needs we have met for the last six months and will probably step our activity down until it might be needed again. But the befriending will continue because there is an emergency need still to overcome: the loneliness that seems especially difficult to bear in a busy city like London. When Mother Teresa visited London many years ago, she said that the greatest poverty in cities like ours was that of being unwanted, lonely and uncared for. I think many of our Angels would agree with her.