Czech Republic – Salesians should lead by example in ecology 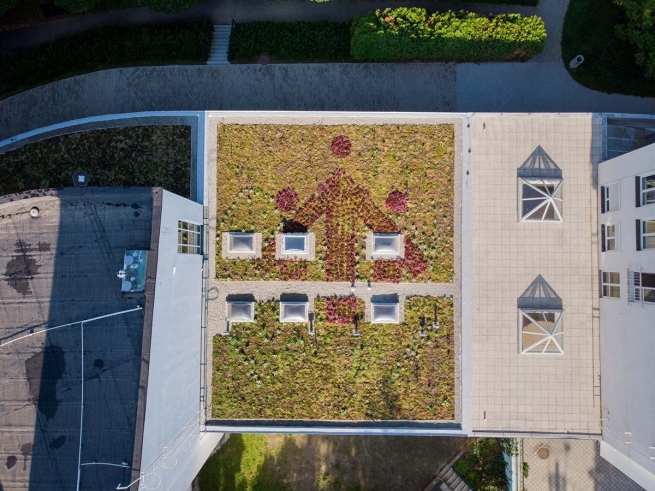 (ANS – Brno) – The Salesians in Brno-Žabovřesky have implemented several ecological projects. The latest one is the “green roof,” a living garden, which they built on the roof of the community house and church. The colorful plants create the symbol of the Salesians. The green roof has brought many positives, the most noticeable being the cooling of the building and the improvement of the microclimate in its surrounding area.

Many years ago, Salesians in Brno started waste-sorting, followed up with composting biowaste, replacing old lights with energy-saving LED bulbs, buying repeatedly usable cups for their events and now they are planning to renew their live fence, and instead of the old bushes, plant about thirty hornbeams. “Pope Francis wrote the encyclical Laudato Si', which no longer discusses if we should be environmentally friendly, but how we should do it. We Salesians are an educational congregation and we have to set an example for young people in ecology as well,” says Fr Libor Všetula, the director of the Salesian community.

The first green roof on a church in the Czech Republic

The city of Brno issued a grant for green roofs and the Salesians managed to get it. The Project was prepared and achieved by Vojta Urban, who grew up in Salesian circles and lived at the Salesian house in Brno while studying garden architecture. They gave him the opportunity to implement one of his first major projects after graduation and he was able to involve other students too. “It's the first green roof on a church in the Czech Republic and what’s more, it's a Salesian one. I got the idea to make the Salesian symbol on it, so it could be seen on the satellite maps,” explains Vojta.

Building a green roof has many positive effects in practical, aesthetic, and ecological ways, which is something the Salesians could feel immediately. Flowering plants attract insects and birds. The roof retains rainwater that would otherwise drain into the sewerage. The water gradually evaporates and cools the building and surrounding area. In the rooms near the roof temperature dropped by 10 ° C on summer days. “The roof isn’t hot anymore and it’s possible to stay on the roof terrace, that wasn’t possible before. When the sun shone a little, it was unbearably hot. The roof with the green garden has become a place where Salesians go spontaneously, even for personal prayer. And what is more, there are herbs that we use in the kitchen,” Fr Libor says, enumerating the project's benefits.

Every house in the city raises the temperature, but when there is a green roof on it, the temperature around it decreases. Vojta explains that due to global warming, the city is getting hotter and hotter and the green roof will become not only a nice thing, but a necessary tool to help us live and breathe better. “Modern Christianity should lead by example also in ecology and in the way we create our environment. We should be visionaries and not be afraid to go into projects like this one, because even this attracts people. The Salesians have a progressive approach in many ways, and if they add ecology to it, it will be great,” thinks Vojta.