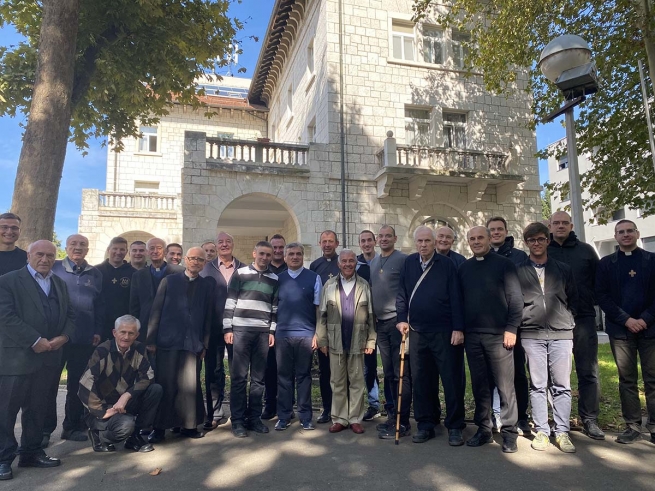 (ANS - Zagreb) - The formative meeting entitled "Salesian Days" took place this year at two different times, 6 and 9 October, in the provincial house in Zagreb. There were more than 60 participants from various communities of the Salesian Province of Croatia. The theme of the meeting was: "Review of the Letter of the Rector Major Fr Ángel Fernández Artime". The choice of the theme was born last year, after the extraordinary visit by Fr Tadeusz Rozmus, then Councilor for the Central and North Europe Region.

During the meeting, Fr ​​Tihomir Šutalo, CRO Provincial, presented the Letter, underlining the four most important themes: the quality of the province, charismatic renewal, Salesian pastoral work and economics.

After a detailed presentation of the Letter's contents, the participants discussed the topics mentioned, dividing into three groups. What emerged was the need for joint planning, programming, monitoring and verification of the Province's structures and institutions to improve existing initiatives and be charismatically recognizable.

Of particular interest was the discussion on "charismatic renewal". In this context, the need was expressed to abandon the mentality of the past and to find new answers to current challenges, always giving priority to young people. The latter, and especially the poorest, must be seen as the first recipients of the mission and must be placed at the center of pastoral action. It was recalled that the expression "poor young people" refers not only to social poverty, but also to an emotional and spiritual dimension. Precisely for this reason, qualitative reorganization of the communities will be necessary, to be more charismatic and apostolically effective.

Reflection on the field of the economy and administration of the Province was also of special importance. In fact, the need to develop a clear strategy for the proper management of the provincial assets and, at the same time, to strengthen the contribution to the Provincial budget and establish greater transparency was highlighted.

Finally, during the meeting, Fr ​​Tihomir Šutalo introduced 55 young clerics in initial formation to the participants and addressed a thought to the community of elderly and sick confreres. Taking his leave, the Provincial then recalled that he will soon visit the Province's local communities and thanked all present for this encouraging and useful meeting.