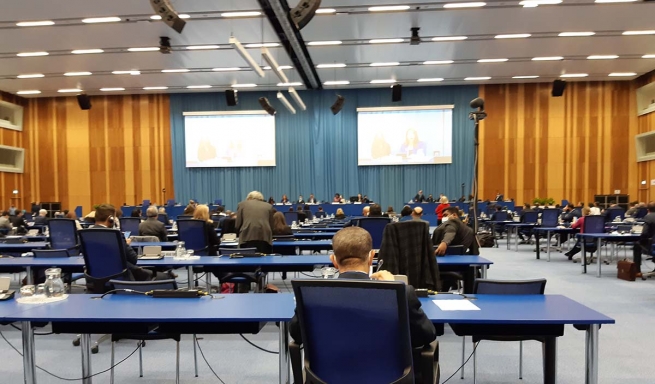 (ANS - Vienna) – The 10th Session of the Conference of Parties to the United Nations Convention against Transnational Organized Crime ends today, 16 October, in Vienna, marking the twentieth anniversary of the adoption of the Palermo Convention. The latter, signed in Palermo following the killing of Judge Giovanni Falcone, is the first legally binding treaty promoted by the United Nations in the context of the fight against crime.

The Convention contains three protocols: the first on the prevention, suppression and fight against trafficking in human beings, especially women and children; the second against the smuggling of migrants by land, sea and air; and the third against the illicit manufacture and trafficking of firearms.

The Salesian NGO "Volontariato Internazionale per lo Sviluppo, the International Volunteer Service for Development" (VIS) also takes part in the Vienna Conference, which participated in the group of international experts coordinated by "Salesian Missions" of New York. VIS, with its projects around the world, has been active for years on the issues contained in the Convention and is strongly committed to advocacy work for the promotion and protection of Human Rights, a commitment that since 2009 has led to the recognition of the Economic and Social Council of United Nations (ECOSOC). For these reasons, at the invitation of “Salesian Missions”, VIS has participated in the preparation of the group of experts and in the drafting of the declaration read in the Plenary during the conference by Bro. Günter Mayer, SDB.

Bro. Mayer highlighted the work that the Salesians are doing to prevent trafficking in human beings and to save, rehabilitate and repatriate children and young people who are victims of it.

“The Salesians of Don Bosco are active through their network of Salesian institutions and NGOs, in the implementation of a wide range of interventions,” he explained. “For example, in Nigeria awareness campaigns were carried out in 5 locations, with 268 secondary schools reached, for a total of about 170,000 students. Campaigns were carried out in markets, parks, hospitals, streets, mosques and churches, reaching around 240,000 people, while three national radios, with an audience of over 12 million people, were mobilized to disseminate relevant information. However, action must be taken at the international level with the support of the UN and the active participation of member states.”

In conclusion, Bro. Mayer stressed that to combat transnational organized crime there is a need for greater awareness of the population, with special attention to the rights of children and young people.