Paraguay – The experience of Msgr. Valenzuela, SDB, with Covid-19: "a magnificent opportunity to accept God's will" 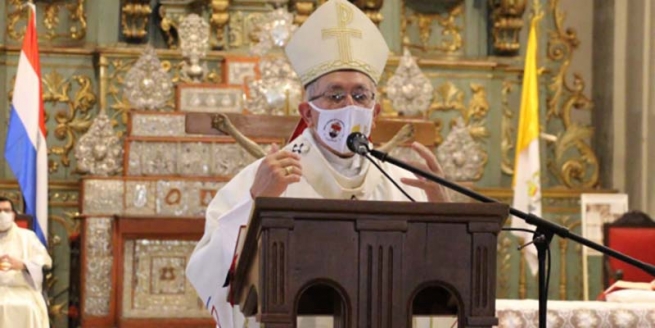 (ANS - Asunción) - Monsignor Edmundo Ponciano Valenzuela Mellid, Salesian, archbishop of Asunción and Primate of Paraguay, wrote a letter from the hospital where he is hospitalized to describe he is dealing with the coronavirus.

In the letter sent to the Aleteia portal, the Salesian prelate described how he became infected with the virus during the pastoral commitments he was carrying out. At his doctor's suggestion, having also encountered other symptoms such as cough and nasal congestion, he was hospitalized as a precaution at the University Hospital, where he is currently recovering.

“This time is a magnificent opportunity for me to accept God's will. To submit myself to rest, prayer, contemplation and virtual contact. To obey the doctors, rest and pray for the sick,” he writes.

The prelate also says that he was subjected to all the necessary examinations; then the cough disappeared after three days and he did not have any other respiratory symptoms, apart from shoulder pain, due to a lung infection caused by the virus, but on the mend thanks to treatment.

“On the first Saturday, I asked for Communion. Sunday and Monday I celebrated Mass in my room. Every day I recited the Rosary, the Liturgy of the Hours. And I have sent important information received from others, including the meditated Word of God, to my contacts,” he continues.

At the same time, he took the time to reply to a large number of messages during his stay. “It took some time, but it is necessary to answer to the greetings, prayers and wishes for improvement that they sent me every day,” he said.

Underlining the "treacherous" nature of the virus, which can generate complications if action is not taken quickly, Msgr. Valenzuela did not miss his chance to thank the doctors who are treating him, emphasizing that he feels "privileged" knowing that not everyone has access to the same treatments. Hence also a consideration on the "structures of injustice in the field of health" and on the need to invest heavily in healthcare as a fundamental common good.

Expanding the reflection, the Salesian bishop observed: “I am sure that both realities, prayer and medical professionalism, achieve a wonderful result. The confluence of both actions, prayer and medical care, indicates the need to consider the human person in all his dimensions: physical, psychic and spiritual. This unity needs to be healed. And this is what I live in this place of silence, meditation and rest.”

The archbishop of Asunción concluded his writing by thanking everyone for “their closeness, affection and prayers”, and on his experience, he observed: “For me, it is a grace of God that puts me in a privileged situation and, hence, of greater commitment towards God and to the episcopal mission received for the evangelization of this humble particular Church of the Archdiocese of Asunción.”