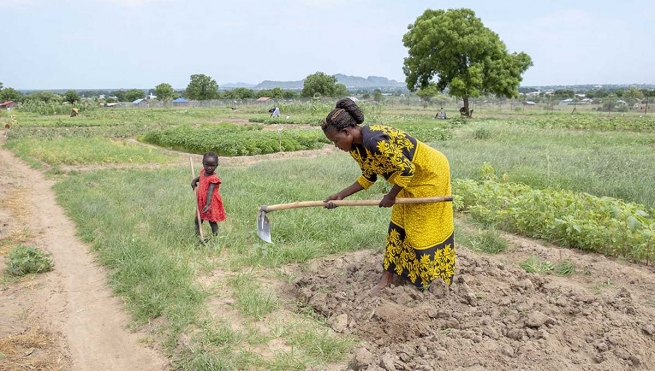 (ANS - Juba) – Across the globe, 15, 16 and 17 October are days which celebrate the International Day of Rural Women, the World Food Day, and the International Day for the Eradication of Poverty. The meaning of these days and related events is to focus on problems that still today fail to find a solution, problems for which it is unthinkable not to make every effort to address and resolve; to do one's utmost, that is, as so many members of the Salesian Family and heirs of Don Bosco's charism do, in a joint commitment that touches several countries and continents.

Gumbo is a suburb of the country's capital, Juba. Here the Salesians have a mission - 10 hectares of land - which borders a large refugee camp. Within the mission, activities are fervent every day, primary school lessons are held, thousands of meals are prepared, medical assistance is provided by monitoring the health of mothers and children, and the land is cultivated, which is a job done here mainly by women.

In one part of the mission grounds, the Daughters of Mary Help of Christians of the “Mazzarello Center for Women” have a Vocational Training Center which is specifically aimed at these women.

One day, while visiting the refugee camp, the missionaries noticed a few microscopic vegetable gardens between the huts, no more than 3-4 square meters of land cultivated with infinite care. The natural consequence was to think of something concrete.

Thus was born the agricultural project that involves 150 women to ensure food security for their families (often composed only of mothers and children). The soil of this country is fertile, but the years of civil war, famine, migrations and dozens of other contributing causes have prevented agriculture to develop until now.

In the land of the mission, the nuns have created a large square plot, the sides of which are about 500 meters, divided into three areas: the first is dedicated to the "school" itself, where women are shown how to cultivate; in the second, each woman is assigned a small lot; in the third, the women are divided into groups for the practice of community cultivation. Alongside this agricultural project, the project for the breeding of animals such as chickens and goats is also being developed.

Today in the Salesian mission of Gumbo 300 families receive food support, about 2,500 children are guaranteed a daily meal while their mothers attend the vocational training center of the sisters (literacy, sewing, cooking) and another 150 are specifically dedicated to agriculture and breeding.

Thanks to the generosity of its benefactors, the Salesian Mission Office of Turin, "Missioni Don Bosco", was able to purchase a new harrow, build two towers and install two large water tanks for irrigation and animal sustenance.

It is not just words, but concrete gestures, which are thus improving, and not just by a little, the quality of people's lives.