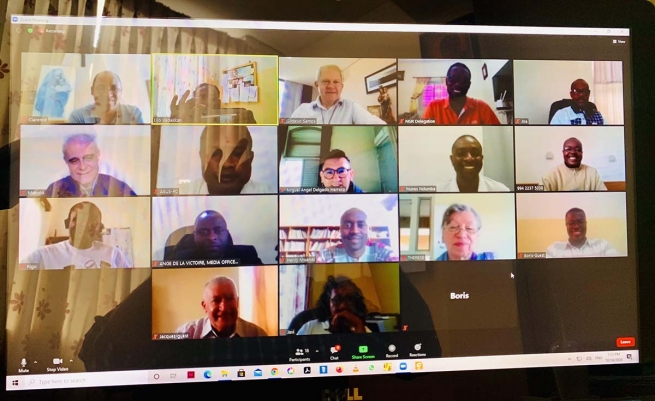 (ANS – Addis Ababa) – Speaking about Social Communication Art.43 of our Constitutions puts it this way “Our founder had an instinctive grasp of the value this means of mass education, which creates culture and spreads patterns of life; he showed great originality in the apostolic undertakings which he initiated to defend and sustain the faith of the people. Following his example, we utilize as God’s gift the great possibilities which Social Communication offers us for education and evangelization”. This was almost the sense of the final concluding words of Fr Gildásio Mendes, the General Councillor for Social Communications who spoke at length on Don Bosco as a Communicator and summarized his thoughts in 10 words such as: Fellowship and Unity, Hope, Communication, Institutional communication, Synergy, Convergence, Digitalization of communities, Ongoing formation for SC delegates, Being Creative, Unity in Diversity.

The meeting of delegates of Social Communication began on 15 October 2020 and was carried out through the Zoom platform and saw the vibrant participation of 18 persons who included Salesian priests, brothers and two Salesian cooperators. In addition to the presence of Fr Gildasio Mendes, there was also the active presence of Fr Alphonse Owoudou, the Regional councilor for Africa-Madagascar, Fr Manolo Jimenes, the provincial coordinator representing the CIVAM and social communication delegates from various countries of the region.

The meeting which lasted for three days, consisting of 4 hours of work per day, had three distinct themes to tackle each day. The first day saw an intense work on the Instrumentum Laboris which was presented to the whole group by two delegates: Fr Henry from AFE and Fr Boris from AFO. On the second day the focus was on the 8 priorities of the Rector Major from his programmatic letter after the GC 28. The region chose two priorities such as the Salesian sacrament of presence and Formation as urgent priorities for the region of Africa-Madagascar. The third day was a day of preparation of the roadmap of Communication to be presented to CIVAM. Even though an additional option was thought of for the online translation, finally the option of simultaneous translation was adopted. All through the meeting Italian, French and English were the common languages of communication.

For his part, Fr Gildasio expressed his great satisfaction for the fine coordination of the meeting and the active participation of all the members in spite of the problems of power failure, unstable internet connectivity, the difficulty of the multi-lingual scenario, etc. “If communication was an appendix before, today it is fundamental. Every Salesian must be an expert in communication. Knowing how to communicate is essential for evangelization. The content of communication is born from the Gospel and is an ever new force,” he said in his concluding words.

During the three days of meeting, the participants reflected on the Salesian charismatic identity, striking a balance between technology and mission, spiritual world and virtual world, on the role of young people, on working in synergy with the departments of Youth Ministry, formation and mission, on the need and importance of working with lay people, etc.