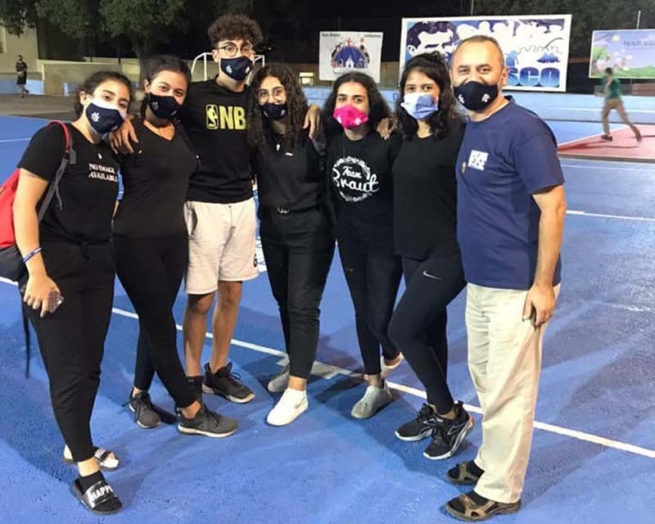 (ANS - Beirut) - In multi-confessional Lebanon, struck by the tragedy of the explosion in the port of Beirut on 4 August last, the proximity of the Salesians to those suffering most is being expressed in many ways: by helping in reconstruction, as well as by hosting recreational activities for the poorest and most traumatized families.

In Al Fidar, on the coast, about 30 kilometers from the capital, Salesians work with young people of all ages and backgrounds, offering a diverse range of activities related to the oratory and volunteer work. Their mission has now intensified.

“We know that families who live near the port, and also those in refugee camps, far from there, continue to be afraid. The shock was powerful and we're doing everything to bring a little joy and make them forget the deafening noise of that explosion that resembled that of bombs,” says Fr Zakerian, Syrian Salesian missionary, Director of the El Houssoun center, Lebanon.

According to data from the United Nations Refugee Agency, there are 200,000 families whose homes have been seriously compromised following what was an explosion of vast proportions. Many saw their homes collapse, others have been moved because their home is unusable. Not to mention those who already lived in precarious conditions in the reception camps: among the children who attend the oratory there are several Syrian, Iraqi and Palestinian refugees.

This is why the Salesians have decided to help them overcome trauma by offering them an opportunity for recreation and community, inviting different families in various shifts to spend a week in their home in El Houssoun.

“We did it to have these people rest,” he says, “especially the children, and remove them from the tension that still exists in Beirut since the day of the explosion ... The greatest pain is to see the repercussions on the most fragile: the families of Syrian and Iraqi refugees who live near the port; the people who were physically injured and psychologically touched by the event,” continues Fr Zakerian.

“It's not just a matter of material damage, as of moral repercussions: deep, psychological wounds inflicted on a population that also includes Syrian and Iraqi refugees, who fled 'their wars', and who in Lebanon found themselves involved in yet another drama,” he adds.

As an example, the Salesian has Suray in mind, an Iraqi refugee, whose leg was wounded while escaping from the site of the explosion. “This little boy is afraid that a violent act like that might happen again; he fled Iraq with his family because of the war and now the war seems to be following him,” he explains.

At the same time, the activities of the Salesians also concern the material reconstruction of the damaged houses: “from the very first days we went with the groups of local volunteers to try to repair the shattered window panes: people could not stay with the windows smashed.”