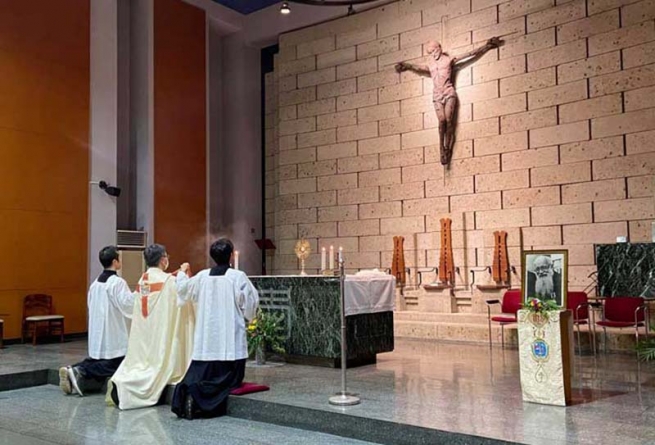 (ANS – Tokyo) – The Salesians of Don Bosco Japan province (GIA) held the Provincial Missions Day on 11 October (Sunday) to advance the commemoration of the World Mission Day which falls the following Sunday. The said event was also held in line with the memorial of Venerable Fr Vincenzo Cimatti, SDB, the pioneer for Salesian missions to Japan whose 55th anniversary of death was remembered on 6 October.

The event began with the video greetings from Fr Alfred Maravilla, SDB, the Missions Councillor. In his message, he encouraged the province of Japan how it is very much part of the Church’s mission of proclaiming the Gospel of Jesus Christ. Fr Jacob Hamaguchi, the provincial of Japan, recollected the Strenna of 2019 about “Holiness for you, too,” that everyone must be driven to live such a life in perseverance just as it was for Ven. Cimatti during his lifetime.

Then Fr Giovanni Marsiglio gave a talk on the missionary spirit lived by Fr Cimatti in Japan which was a life of total humility and trust in the Divine Providence. Fr Marsiglio himself, having lived with Fr Cimatti when he was a cleric gave personal testimonies about the life of the venerable. Perhaps the most inspiring of all the accounts on the life of the venerable is his aspiration to leave everything for the sake of others. Fr Cimatti has been known for his academic endeavours which he was willing to give up for the love of music that contributed to the means of evangelization in the mission land. Until now, Salesians and all those people Ven. Cimatti has inspired sing reverently the songs the Venerable composed.

The last part was the missionary experiences shared by young missionaries in Japan. Each of them recalled how he discovered his missionary vocation within his Salesian vocation and how he adapted to life in the new mission land. What was common for all the sharing was the capability to love the people and the culture of Japan. A good manifestation of such capability is to embrace the challenges caused by the language barrier and overcome it.

Fr Ambrosio Da Silva shared his missionary experiences through a video message from Hamamatsu. He explained that overcoming language and cultural barriers are not limited to ad gentes missionaries, but rather is about each Salesian, who is called to learn the language and the culture of the young people. It opens a perspective that everyone is a missionary in a sense of being sent to preach the Gospel of Jesus Christ in his own way with ongoing discernment.

The 2020 Salesian Missions Day was a first attempt to hold a province-wide gathering among the Salesians simultaneously online, to facilitate the presence of those confreres who could not come due to the Covid-19 situation. It was a good opportunity to perceive the ways how to preach the Gospel and enkindle missionary vision in the current circumstance the world faces.