Vatican – “The Economy of Francesco”. Young protagonists of change 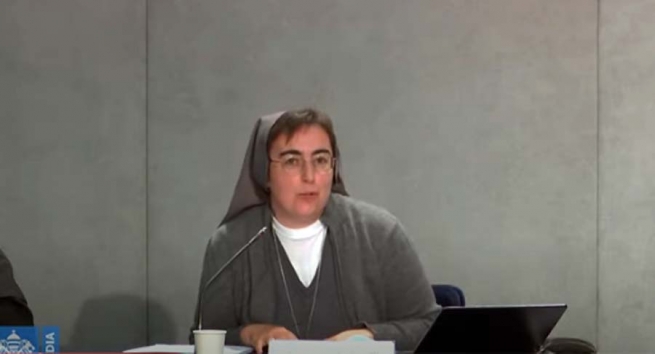 (ANS - Vatican City) - "In a world sick with short-term thinking and little vision of the future, giving a voice to young people means starting to build bridges towards the future," said Sr. Alessandra Smerilli, religious of the Daughters of Mary Help of Christians (FMA), in her speech on Tuesday 27 October at the press conference for the presentation of the event "The Economy of Francesco - Pope Francis and young people from all over the world for the economy of tomorrow".

"The Economy of Francesco" is an international event featuring young economists and entrepreneurs from all over the world, which will be held from 19 to 21 November in live streaming on the portal www.francescoeconomy.org, and in which the Pontiff himself will participate at the conclusion of the three-day event.

“In these times of uncertainty, Pope Francis invites us to look beyond, to prepare for the future, and to do so in a concrete way, always with an eye to those who are most in difficulty. And young people are responding to this invitation. Therefore, they will not present us a document, they will not make a treatise on what 'the Economy of Francis' means, but they shall prepare proposals, they shall tell us how they want to commit themselves and what help they need,” explained Sister Smerilli, Full Professor of Political Economy at the Pontifical Faculty of Education "Auxilium" and Councilor of State of the Vatican City.

One of the central themes of Francis' Economy, the nun pointed out, is "the re-evaluation of care within society and the economy as a key to shaping the future, together with the need for a more feminine and of greater participation of women for a more inclusive economy and finance.”

But in order to pursue this change of approach, the Pope does not propose a ready-made recipe that young people must only follow: rather, as the nun herself observed: “'The Economy of Francis' means above all young people, hope and concreteness. It is not about inviting young people to spread a message, but asking them to help create it,” because, she concludes, “young people are a 'present' (and not just the future), who must be listened to.”

The initiative of "The Economy of Francesco" developed following the invitation that the Holy Father sent on 1 May 2019 to economists, students, male and female entrepreneurs under 35, and was scheduled for 26 to 28 March 2020, in attendance, in Assisi; however, following the Covid-19 emergency, it was postponed from 19 to 21 November in live streaming.

The organization of the event in an online version will allow all young people registered (2,000 from 120 countries) to participate in the meeting. And the 12 thematic villages initially planned in presence in Assisi have been transformed into online work sessions that young people have already carried out in recent months. They are: work and care; management and gift; finance and humanity; agriculture and justice; energy and poverty; profit and vocation; politics for happiness; CO2 of inequality; business and peace; Economy is woman; companies in transition; life and lifestyles.