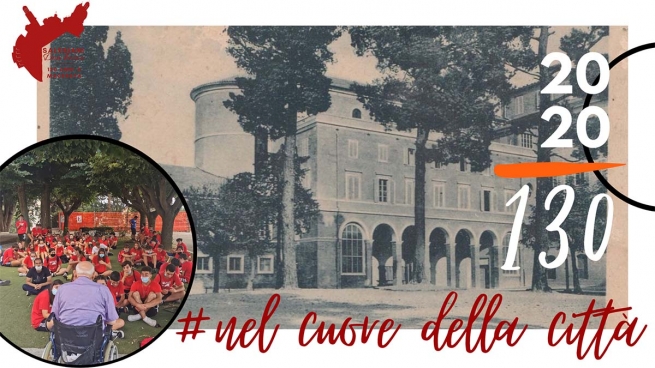 (ANS - Macerata) - The Salesian Institute "San Giuseppe" of Macerata, in the Circumscription of Central Italy (ICC), celebrates its 130 years this 2020; in fact, the motto that guides the celebratory initiatives is: "20 + 20 = 130". The house was inaugurated on 4 November 1890 and now, after a year of preparations, Salesians and young people together are now preparing to celebrate this simple and complex anniversary with a week of events: simple in the desire to thank the Lord for the gift of Don Bosco and his charism; complex for the current world situation before which, however, one does not want to remain exclusively passive.

This is why, with a limited number of places and in compliance with safety regulations, they have scheduled various events in the heart of the city as responsible citizens, without losing the indispensable preciousness of communion and sharing.

Celebrations start with the traditional Castagnata [chestnut-roast] on October 31, which will be accompanied on the same day by a visit to the cemetery to remember those who passed through the courtyards of the work in past years; it will continue on November 1, All Saints Day, with a pilgrimage to Loreto promoted by the Association of Mary Help of Christians (ADMA) to entrust every one to the protection of Our Lady.

The highlight of the activities will be reached on 4 November, the day on which 130 years ago the first Salesian community came to live in Macerata.

The day will be experienced around the Eucharistic celebration at 7 pm in the Don Bosco Temple, presided over by the Bishop of Macerata-Tolentino-Recanati-Cingoli-Treia, Msgr. Nazzareno Marconi, and concelebrated by the Salesian community. A passionate debate will follow at 9.15 pm on the YouTube channel "Salesiani Macerata" which will involve some interesting figures and persons: stories of past lives in the courtyards and rooms of the Salesian house, lived first as children, then as young people and, today, as builders of a society that aspires to the beauty of life for each and everyone.

During the evening, the new logo of the Salesian House, the work of designer Riccardo Gironella, will also be presented as will the new website created by the computer programmer Roberto Rossi.

Among the participants are: Mons. Nazzareno Marconi, and the Mayor of the city of Macerata, Sandro Parcaroli, and other civil and religious authorities.

The initiatives will continue until the following weekend with social activities for young people on Saturday 7 November under the motto "For 130 years in the hearts of young people"; also, proposals dedicated to the associative groups of the house on Sunday 8 in the spirit of the slogan: "For 130 years towards the future".

Finally, the celebratory activities shall close with the Sunday afternoon Eucharist presided by the Director of the work, Fr Galante, who will also represent the official beginning of the new pastoral year.

On the YouTube channel "Salesiani Macerata" there is a long series of videos showing the progress of preparations for the anniversary, its title: "20 + 20 = 130".