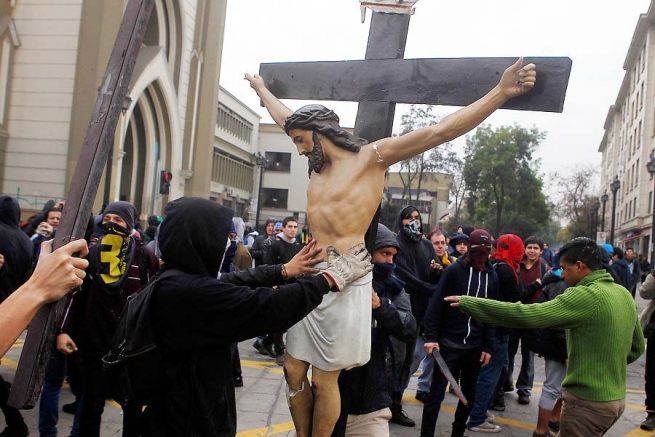 (ANS – Santiago) – During a march of students organized by the Students Confederation of Chile (CONFECH), on Thursday, June 9th, some incidents occurred which finished with the profanation of the ‘Gratitud Nacional’ temple and the destruction of a crucifix that was inside the church which is entrusted to the Salesians and is located in the historical center of the Capital city.

“The Church was repeatedly attacked, the stained glass windows were hit several times. Today, not only the gate, but also the Crucifix was destroyed,” said Fr. Jofre Galvarino, Rector of the House. “It is very painful to see the symbols of our faith attacked. Violence brings nowhere”, said Fr. Marek Burzawa, Vicar of the Central Sector of Santiago.

On his own behalf, the Minister of Interior, Hon. Mario Fernández, expressed his apprehension for the situation and his solidarity with the Salesian Congregation that runs the parish, and he also assured a judicial action. The auxiliary bishop of Santiago, Msgr. Fernando Ramos, came to the ‘Gratitud Nacional’ temple to express his concern for such actions and also stated that “democratic coexistence is based on mutual respect. On the extent in which we reciprocally respect one another, we will also have a more united and sympathetic country, a country more respectful of different opinions”.

The spokesman of the National Coordination of Students (CONES), Marcelo Correa, deplored the incident and said that such actions must not be repeated, because they darken the work of the students’ movement.

The Salesian Province released a declaration regarding the profanation, and the Provincial, Fr. Alberto Lorenzelli, expressed “our absolute denial, pain and indignation. As a religious family devoted to education, evangelization and social promotion, we share the aspirations for a quality education, which offers opportunities to all the youth, but especially to the most vulnerable. This is why we are particularly saddened that a group of young people committed such a grave action”.