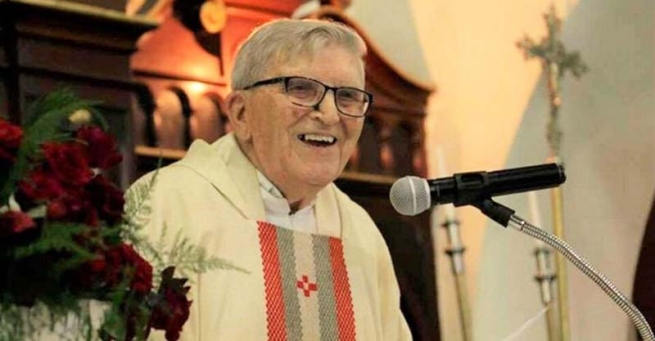 (ANS - Santa Clara) - A few months after his 100th birthday, celebrated on 23 July, the Salesian missionary Fr Bruno Roccaro ended his earthly pilgrimage this past Tuesday, 3 November. “The living history of the Cuban Church, Italian by birth, Cuban by vocation,” his confreres in Cuba recalled.

Born in Scorzé, near Venice, on 23 July 1920, Bruno Roccaro was the last of the 17 children of Maria Bertolin and Pietro Francesco Roccaro. He grew up in a family of peasant origins and of a simple life, where he breathed a "climate of faith" and where everyone was "very busy in pastoral activities", so much so that his brother Luigi was also a Salesian missionary in Chile, and 11 nephews of Fr Bruno embraced the religious life.

A pupil in the Salesian schools, in 1937 he entered the novitiate in Este; the following year he made his first vows and was ordained a priest on 3 July 1949 in Monteortone.

At the age of 50, Rector Major Fr Luigi Ricceri asked him to go to Cuba to collaborate in the formation of priests. As a Salesian, Fr Roccaro devoted most of his life to formation, above all: first in Italy, then since 1970, in Cuba for 25 years as formator and coordinator of studies at the "San Carlo" inter-diocesan seminary in Havana. He had a degree in Mathematics in Padua and was licensed to teach in high school in Mathematics and Physics. In Cuba for 22 years he was Delegate for the Salesians, maintaining relations with many ecclesiastical and civil authorities and with religious. He is also remembered for his contribution to the Cuban Ecclesial Reflection (REC) which paved the way for the Cuban National Ecclesial Meeting (ENEC, in Spanish) in 1986.

In his last letter to his nephew Ilario, dated last September 24, he wrote: "They tell me that you are worried about my health. It is not a question of being alarmed, but yes of looking at reality in the face and continuing to live and work as always, for the greater glory of the Lord and the good of the people.”

In the homily for the funeral the Bishop of Santa Clara, Msgr. González Amador Marcelo Arturo, said that Fr Roccaro leaves three messages: to the Church of Cuba, to always undertake, with the help of the Holy Spirit, new paths for the Gospel; to the Salesian Family, to preserve and make the spirit of Don Bosco grow; to all, to promote the Cause of Beatification and Canonization of the Venerable Fr José Vandor, a Hungarian missionary in Cuban soil, and of whom Father Roccaro was a great animator until the last days of his long life.

Participating in 2018 in the Seminar promoted by the General Postulation in Rome, in the thought of the "Good night", Fr Roccaro, in addition to retracing his long missionary life and his commitment in the Cause of Fr Vandor, left everyone his program of life, of the holiness to which all are called: "Let me know and love you, make you known and loved."