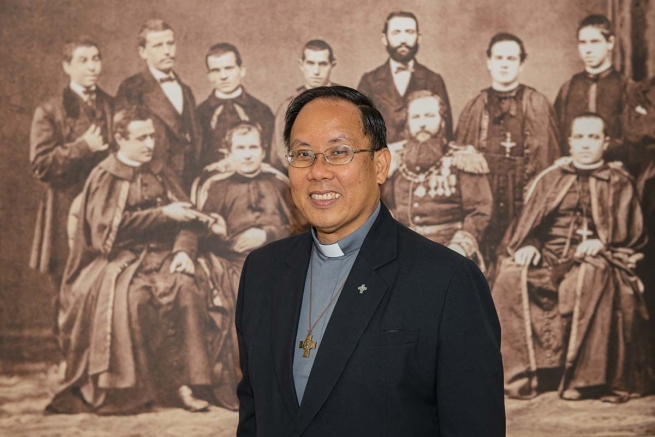 (ANS - Rome) - In view of 11 November, the anniversary of the first departure of the Salesians of Don Bosco to the missions in South America, the General Councilor for the Missions, Fr Alfred Maravilla, shares a reflection.

145 years ago, it was Thursday - 11th of November 1875 - in the church of Mary Help of Christians at Valdocco. After the singing of Vespers and the Magnificat, Don Bosco went up to the pulpit and outlined the apostolic programme of the departing missionaries: Start with the evangelisation of Italian emigrants and aim at the evangelisation of Patagonia. He concluded with these prophetic words: “… Who knows if from this departure and from this little seed a great plant will arise? Who knows if it be like a little grain of millet or mustard, that will spread little by little which will produce a great good?” Then Don Bosco embraced the 10 missionaries one by one. To each one was given a copy of the Souvenirs to the First Missionaries that he himself had written in pencil on a notebook during one of his return journeys. Don Bosco accompanied the missionaries as far as Genoa where they boarded the French steamship Savoie on November 14. A witness saw that Don Bosco’s face was all red from the effort to contain his tears.

This scene, often romanticised, has remained in our popular Salesian imagination. But today questions too remain in many: Is missionary activity still relevant today? We do not even have enough Salesians for our own Province, why send them out as missionaries to other countries?

Since God wills that all be saved, all have the right to know Jesus Christ. Hence, the possibility to know Jesus must be made concretely available to all. In fact, all disciples are commanded to preach the Gospel in every time and place (Mt 28:19-20) so that all may discover the “unsearchable riches of Christ” (Eph 3:8). Yet, we are all aware that even today, as in the past, many people do not know Jesus nor do they have an opportunity to come to know or accept him. This is why more than ever, today the Church is called to “go forth”, with the same readiness to listen to the voice of the Spirit and aflame with the same missionary ardour and courage that inspired the missionaries of the past (Redemptoris Missio 30; Evangelii Gaudium 24).

Our Salesian vocation places us at the heart of the Church (Const 6) “which is missionary by her very nature” because she “is sent forth to the nations” (Ad Gentes 2). Don Bosco conceived his Oratory with a missionary perspective for poor and abandoned youth without a parish. Animated with missionary zeal, he launched other initiatives: the printing press, the Catholic Readings, the Salesian Bulletin and founded the Salesian Society, the FMA, the Salesian Cooperators and the ADMA. Finally, he opened an entirely new page in the life of his young Congregation by sending out Salesian missionaries in 1875 and the FMA in 1877. Don Bosco passed on this missionary ardour to his religious family. Thus, the 19th and 20th SDB General Chapters underlined that Don Bosco’s example indicates that the missionary commitment is part of our Congregation’s nature and purpose (GC19, 178; GC20, 471).

Missionaries, therefore, are not those we can spare among the many confreres in the Province. Nor are those we keep because “we need confreres here”. The Salesian missionary is a confrere who responds to his missionary vocation within his Salesian vocation. Indeed, our annual missionary send-off is a concrete expression of our fidelity to Don Bosco’s missionary spirit and commitment!