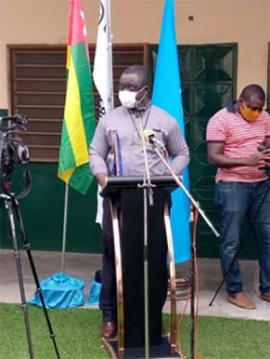 (ANS - Kara) - A center for children's access to Law and Justice was opened at the "Immaculate" shelter in Dongoyo, Kara, in October. The Center is the result of the collaboration between UNICEF, the Togolese state, and the Salesian community of Kara.

The center's official inauguration took place in the presence of various administrative and religious authorities on Thursday 8 October 2020. After the presentation of various guests, the moderator of the day presented the program of the ceremony to about forty participants.

The Prefect of the city of Kara, Colonel Balai, in his welcome speech, praised the inauguration of the new center, which constitutes an important support for the detention center in the city of Kara. He also thanked the Salesian community and UNICEF for their continuing efforts to provide education and rehabilitation to children in conflict with the law.

Subsequently, the Rector of the Salesian community of Kara expressed his gratitude to UNICEF and to the Togolese state, represented by the Prefect, and subsequently promised the entire delegation and UNICEF that the community will offer the utmost care to this project.

The establishment of the Center for the access of minors to Law and Justice takes place in a context of lack of infrastructure for the re-education and social reintegration of minors in conflict with the law, and goes to support the new Togolese regulations on juvenile justice.

As explained during the inauguration, the objective of this support program for Kara is to "make the Togolese legislation effective as regards the judicial protection of child victims, witnesses or alleged perpetrators of crimes, including through civil and administrative proceedings"; it intends to give concrete expression to result no. 2 expected from the project: "Improving access to justice for children in Togo".

In this way, those responsible for juvenile justice have strengthened structures to ensure better implementation of the Code of Minors, in accordance with international guidelines and standards on juvenile justice. For this, they expressed public thanks to the Salesian center for having accepted to host this rehabilitation center for minors.

The inauguration ceremony was completed with a speech by the Secretary General of the Ministry of Justice, the exhibition of the children of the "Immaculate" house, the unveiling of a commemorative plaque of the day, and a visit to the premises by the guests present.