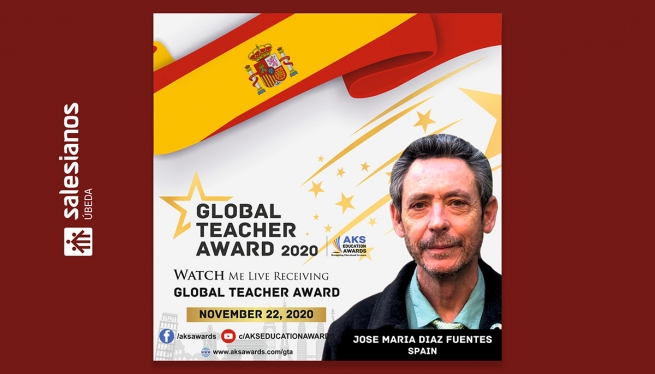 (ANS - Úbeda) - Professor José María Díaz Fuentes, who has been working for almost three decades at the "St Domenico Savio" Salesian School in Úbeda, has been awarded the "Global Teacher Award", a prestigious international recognition assigned by the “AKS Group” through its “AKS Education Awards” which aims to give credit to the excellence of teachers around the world.

Professor Díaz Fuentes is one of the three professors from all over Spain who have achieved this result in this 2020, third edition of the award, which saw thousands of candidates from over 100 countries participating.

Díaz Fuentes thus becomes part of the group of "exceptional" teachers chosen for having made an extraordinary contribution to their profession, thanks to the excellence in teaching and the growth of their students, teachers serving the community inside and outside the classroom.

With a degree in Physics and with a Diploma of Advanced Studies in Educational Sciences, he has accumulated almost thirty years of experience as a teacher of Physics, Chemistry, Mathematics, Computer Science and Technologies in secondary/high schools. In particular, he is known for his commitment in trying to foster the interest of his students in the sciences, especially in the fields of Physics and Astronomy, for which he has been promoting, together with his colleagues in the department, basic works in the classroom and others developed comprehensively and on a voluntary basis in extra-curricular activities.

Thanks to selfless efforts, his research group has already been awarded several times by various scientific bodies, why, a few years ago, he was appointed "Ambassador of the Scientix Community" founded by the European Commission in the context of "Horizon 2020" program for research and innovation. This means that he participates in a European project which develops didactic units that can be used by other teachers in their respective classrooms to transmit scientific knowledge and skills to students.

For his part, he assures us that what led him to study Physical Sciences was his passion for astronomy as a child. To this was then added his inclination for the world of education which, he says, influenced his formation at the Salesian center "in an atmosphere of constant generosity and joy."

"Our future depends on education in all senses, on the vocations (all) that will come and on the structures that are made available for their development," he said.

Now, with this Global Teacher Award, he is recognized for his teaching effectiveness, his specialized leadership, his commitment to the community, and his potential to further distribute the healthy development aspects of educational programs. All this in the belief that a small contribution can make a big difference for society.

Because there is no better way to create a better world than through stimulating and inspiring teaching.

The prizes will be awarded next Sunday, November 22, on the occasion of a digital gala that will conclude the week focussed on education.