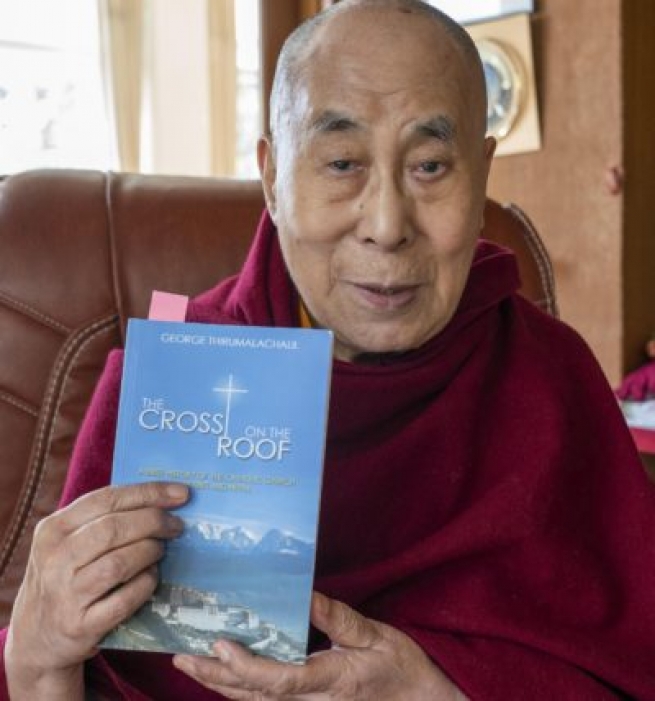 (ANS - Kathmandu) - The Dalai Lama, the highest theocratic authority in Tibet, expressed great appreciation for the book by Fr George Thirumalachalil, a Salesian, on the history of the Catholic Church in Nepal, Tibet, and several states of India.

“His Holiness was very interested to know the history of the missionaries to Tibet and the hazardous journeys and experiences they endured crossing the difficult terrains of Tibet,” says Dalai Lama’s secretary Chhime R. Chhoekyapaan in an email letter to Father Tomy Augustine, rector of Salesian College in Sondada, West Bengal.

The 235-page book, entitled "Cross on the Roof" is a brief history of the Catholic Church in Tibet and Nepal. It was published by the Salesian Institute of Sonada in collaboration with the Nepal Don Bosco Society in Kathmandu. The book narrates the missionary expeditions from the 18th century and the attempt to make the Gospel known in Tibet, the traditional center of Buddhism, and in Nepal, the only Hindu kingdom in the world. In Nepal, four missionary stations were opened headed by the Capuchins, who remained there from 1715 to 1769.

The Salesians started their mission in Nepal many years later, in 1992. Today they are well established in the country with 21 religious from five Indian Provinces serving 7 presences. In Nepal, the Salesians have decided to contribute to and disseminate Christian literature and, precisely for this reason, the book by Fr George Thirumalachalil, published last October 18, was sent to the Dalai Lama, who has always been interested in Christian history.

In fact, as his secretary explains, the current Dalai Lama visited the symbolic places of Christian missionary activity in these territories, such as the birthplace of Francesco Orazio della Penna (1680-1745), a Capuchin missionary pioneer in Tibet; and in 2005, on the occasion of an exhibition on the history of missionaries in Tibet, he also visited Rimini, Italy, to visit the Capuchin monastery.

The Dalai Lama also recalled that relations between Buddhists and Christians have ancient roots. In fact, he recalled the close contact that one of his predecessors, the Dalai Lama VII (1708-1757), had with Pope Clement XII (1652-1740).

Finally, secretary Chhime recalled his visit to the Salesian College of Sonada in the 1970s, when he was a student of the "St Joseph's School", North Point, in Darjeeling.