Guatemala – The Eta storm, the fury of nature 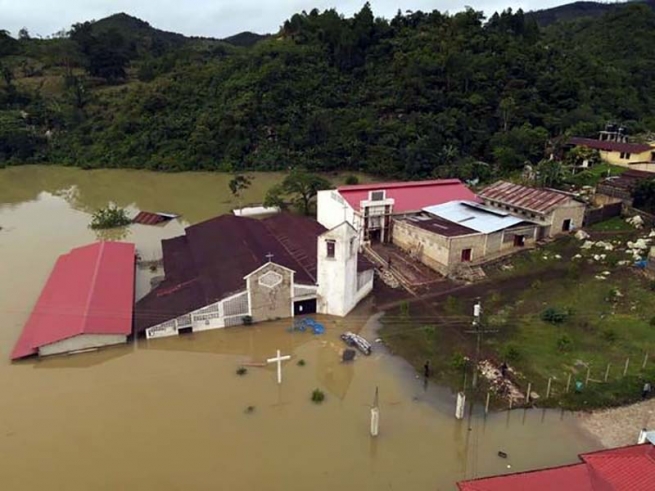 (ANS - San Pedro Carchá) - “It was a terribly perfect combination. The virus, the one that changes its name, coronavirus or Covid-19, has long put us in the corner. Then the flood hit us, not universal, but yes, devastating.” Thus begins the testimony that Fr Heriberto Herrera, SDB, sends from Guatemala, a country still very much tried by the passage of the tropical storm Eta and the subsequent hurricane called Iota.

Not even the elderly had ever experienced such a scandalous waste of water. In a few days the landscape has changed: water and more water, above, below and in between. And it continued to rain without brakes, almost with enthusiasm.

The situation began to turn gray when the images and stories of what was already a tragedy never seen before in these parts appeared. Landslides, lagoons that come out of nowhere, roofs at water level, blocked roads and paths. Men, women and children crowded together in provisional and providential spaces.

And then the innate goodness of the human heart emerged. A wave of emergency aid began to appear as if by magic. Saving lives, clearing roads, mobilizing emergency resources. Here is the touching dimension of this seemingly insensitive human being.

Our small and large Salesian world of Carchá has had the misfortune of being at the epicenter of the storm. Our 300 villages or rural communities have been hit by the disaster. Salesian solidarity is beginning to make itself felt. Within a few days, our center in Chibajché started receiving trucks full of all kinds of aid. Courageous volunteers ordered and packaged these valuable resources, which were then sent by pickup to reachable communities.

Our second mission center, Campur, fifty kilometers from Carchá, turned out to be one of the most damaged places in the country. In a short time, the village turned into a deep lagoon. So deep that it completely covers our church and part of the Salesian house. Many houses are submerged, others have been invaded by water, and in some cases, this dirty liquid has destroyed the goods. The whole population fled for fear that the small hill next to it would collapse over the village.

Fr José María Seas, a Salesian, is the parish priest of Campur. He experienced the tragedy on his skin. As an impromptu reporter he recorded shocking videos, narrated in such a dramatic voice that Campur became national and international news. The result: immediate aid to Campur is unstoppable, both from the government and from communities near and far.

As I write to you, Iota, Eta's twin sister, is arriving, (ed.'s note, Hurricane Iota actually reached Guatemala on November 17.) Only this was missing. Some say it's a Grade 5 hurricane, others a Grade 1. The reality is we don't want any more water or damage.

The common will is to roll up our sleeves and rebuild this corner of Guatemala inhabited by poor, peaceful and hard-working people.