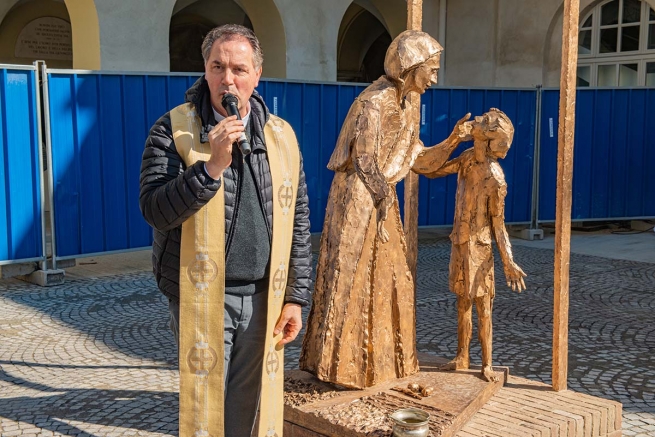 (ANS – Rome) – For the whole Salesian Family, the mother of Don Bosco is a shining icon, inspiration, model of apostolic life to follow. The Church through Pope Benedict XVI declared her Venerable in 2006 for having lived a life of heroic virtue. Every year on 25 November the Salesians of Don Bosco, in accordance with their General Regulations, celebrate a Mass for their departed parents on her anniversary day. Mamma Margaret passed away on 25 November 1856.

Her statue at Valdocco, blessed during the General Chapter 28 by the Rector Major, and a very inspiring point made by Pope Francis in his Message to GC28, offer us a good occasion to celebrate her anniversary this year with a special touch:

"What would have become of Valdocco without the presence of Mamma Margaret? Would your houses have been possible without this woman of faith? In some regions and places “there are communities that have long preserved and handed on the faith even though no priest has come their way, even for decades.

This could happen because of the presence of strong and generous women who, undoubtedly called and prompted by the Holy Spirit, baptized, catechized, prayed and acted as missionaries. For centuries, women have kept the Church alive in those places through their remarkable devotion and deep faith” (Post-Synodal Apostolic Exhortation Querida Amazonia, 99).

Without a real, effective and affective presence of women, your works would lack the courage and the ability to transform presence into hospitality, into a home. Faced with the rigour that excludes, we must learn to generate the new life of the Gospel. I invite you to implement approaches in which the female voice, her outlook and her actions – appreciated for her individuality – finds an echo in making decisions; not simply as a helper but as someone fully involved in your presences." (Pope Francis)

This message of Pope Francis is a strong invitation for us Salesian to make some progress on the path with our lay mission partners, since a good number of them are contributing like Don Bosco's mother to the Salesian mission in all of our houses and works.