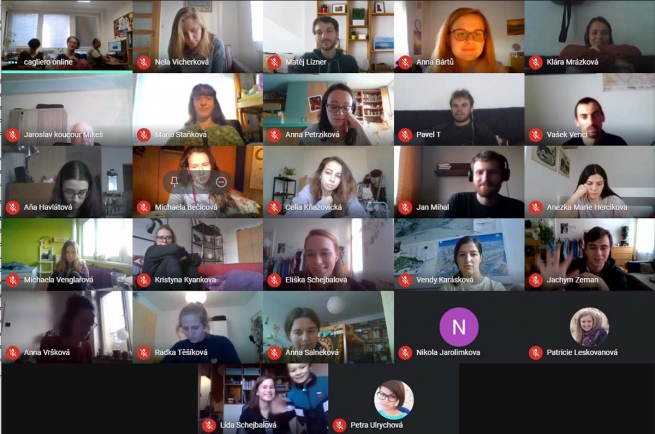 (ANS - Prague) - An important part in the formation of volunteers is personal accompaniment, together with actual meetings with young people. The situation this year is not very favorable to these dynamics, why the Salesians of the Czech Republic have embraced the digital space with conviction.

The "Cagliero" formation course for Czech Salesian mission volunteers, organized by the provincial association of missionary animation and voluntary service "SADBA", had already missed a first appointment, in October, due to the pandemic. So, in order not to miss another weekend, tactics were changed, and the training scheduled for November 20-22 was made online.

Nelca, a young ex-volunteer and member of the team, says: “Fr Jaroslav Fogl, Salesian and Delegate for missionary animation of the Czech Republic Province, has almost set up a professional studio in the SADBA office. Helena Janikova, coordinator of Cagliero, examined it with her aesthetic eye and added some colored cloths and wooden giraffes, to create the right missionary ambiance.”

On Friday evening, after a rather timid presentation of the participants and the course program, the "Cagliero" team had doubts about how many would reconnect the next day. They were surprised on Saturday morning to see that everyone had returned. And not only the volunteers in preparation, but also former volunteers.

Theory alternated with volunteer practices, so, even if everyone was sitting in their room, thanks to photos and videos they immersed themselves in the realities of Papua New Guinea, India, Bulgaria, Ecuador, Mexico, Zambia, Kenya, Tanzania and Democratic Republic of Congo. In groups, they reflected on who he or she really was and what characterizes a “Salesian mission volunteer”. They also got to know the structure of the Salesian Family.

Furthermore, the volunteers had to present their surrounding environment and got involved thanks to the stimuli of the organizing team, who invited them, for example, to show the spiciest food they had at home or something they certainly would not find in Ecuador, for example.

After the meeting, Helena Janikova shared her impressions: “Despite the initial shyness and uncertainty, we discovered that it is possible to recreate, at least partially, the right atmosphere through the waves of the Internet and have them reach right into the rooms of the volunteering candidates.”

The 23 participants were also happy with the dynamics. One of them, Anna, evaluated the experience as follows: “I hope for a better tomorrow, but I keep telling myself that if we managed to create a nice atmosphere and a day full of information in this way, a personal meeting will certainly be a success!”

For young Czech volunteers, the next appointment, which hopefully will be held in person, is scheduled for December. “At least now we all know that preparation for missionary service and accompaniment will proceed well in any case,” conclude the leaders of the formation team.