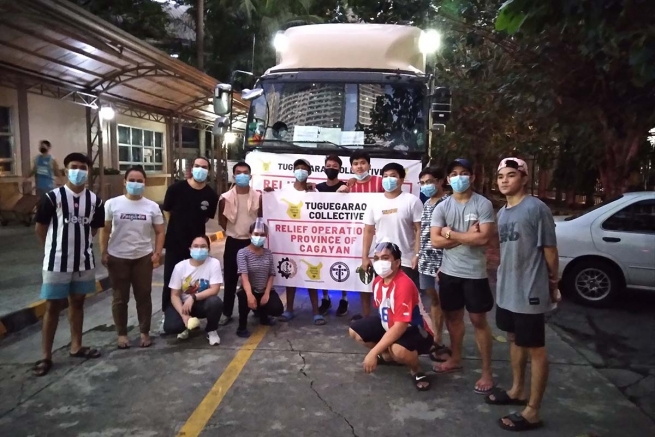 (ANS – Makati City) – The destructive aftermath of Typhoon Ulysses in the provinces of Cagayan and Isabela was felt in the form of raging floods that mercilessly engulfed the valley, forcing people to spend the night on the roofs of their houses desperately waiting for help.

Once news trickled in, primarily through social media, Don Bosco Technical Institute- Makati began a donation drive on Saturday, November 14, to aid the flood victims. Initial organization was made by Fr. Juvelan Samia, the Institutional Pastoral Animator, with the Archdiocese of Tuguegarao, and was immediately expanded through a partnership with Tuguegarao Collective

Drinking water, food, toiletries, and clothes began to arrive en masse on Sunday, November 15. The first ten-wheeler truck filled with relief goods were sent to Tuguegarao on the afternoon of Monday, November 16, which was made possible through the help of some in-house Migrants and youth volunteers from Saint John Bosco Parish-Makati and San Ildefonso Parish, who continued to help throughout the week.

Donations in cash and kind continued to pour to Don Bosco Makati from Tuesday onwards. The large amount of material aid enabled them to send another ten-wheeler truck on Thursday, November 19. Later that same day, they were able to arrange with Air Asia to airlift a significant amount of relief goods, with a light panel truck arriving in the early evening to pick up the donations in time for a chartered flight to Cagayan Valley.

On Friday, November 20, they were able to send a fully loaded six-wheeler truck to Tuguegarao. The following day, Saturday, November 21, elements from the Philippine Army’s Civil-Military Operations Regiment were able to haul eighteen truckloads of water, clothes, and books courtesy of Don Bosco Press.

The following Monday and Tuesday, November 23 and 24, five more trucks gathered the remaining clothes and water, bringing the week-long relief operation to a close, and giving the Educative Pastoral Community the opportunity to rise up to the challenge of becoming Honest Citizens and Good Christians in this hour of need.