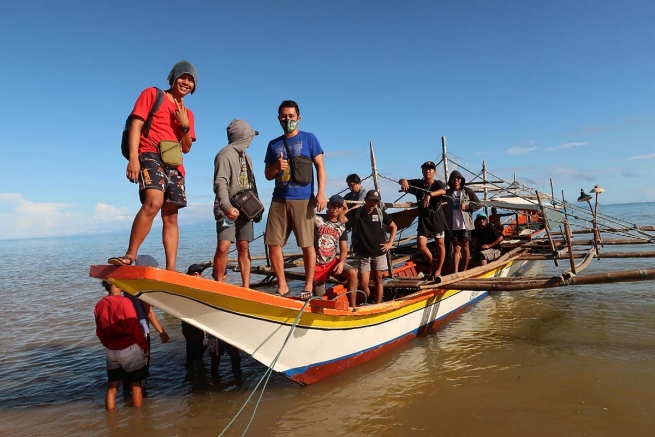 In May 2020 the Don Bosco centre was already reaching out to families affected by the lockdown due to the Covid-19 pandemic. Food relief packs had been distributed to fourteen communities. That would translate to 743 families or 2,720 individuals.

In the wake of the three successive typhoons, Don Bosco Legazpi reached out to 730 families in 20 communities. Food relief packs were distributed. Roofing materials were also given out to some families. (Funding limited the number of families that could be assisted.)

To one community in Guinobatan, cleaning materials (pails, basins, bath soap, detergent soap, etc.) were given out because they suffered a mud flood. In San Miguel island, fishing boats were given out to some families. Many more families lost their fishing boats, but limited funding forced the number of beneficiaries to a few families. A few months back Don Bosco Legazpi had completed a training program in crop production for the Agta, a group of indigenous people in Bicol. Salesians and their lay mission partners also reached out to them with food relief packs for 125 families.

Don Bosco Legazpi has already forged a strong working relationship with these communities. “We have also learned how to organize an efficient outreach effort. And the reason is simple. Calamities are a yearly occurrence in the Bicol region and so we work with these communities almost every year. Typhoons are the most common occurrence. Sometimes they are storm surges that wreak havoc in coastal areas. This was the case in Tiwi two years ago. But the biggest relief effort in recent memory was due to the eruption of Mayon volcano about four years ago,” they say.

The Salesian outreach activities are funded by donors from the Philippines and abroad. The extent of the assistance is heavily dependent on the funding received. This was true in the past. This remains true in the present and in the future. And Don Bosco Legazpi hopes to maintain the trust of these donors.