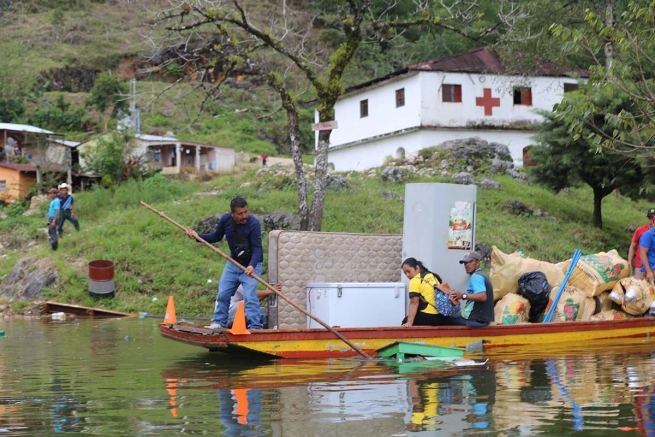 (ANS - San Pedro Carchá) - 28 days have passed since the arrival of the Eta and Iota storms in the lands of Central America and the consequences of their passage are still being felt. Houses destroyed, roads damaged, families affected, people dead and missing. In the Campur area, near San Pedro Carchá, in the Department of Alta Verapaz, the Salesians animate a mission with the population of the Q'eqchì ethnic group, which has heavily suffered the effects of these natural phenomena. About 500 families and as many houses remained underwater, about 6,000 people were hit and transferred to shelters, hundreds of small businesses and crops were lost. And at least five villages in the area are in a very precarious state.

The entire village of Campur was flooded due to the amount of rain that fell and the overflow of various water sources found on the slopes of the mountains surrounding the region.

Like the villagers, the mission station “San José” in Campur was also completely flooded. The first phase of the reconstruction, which consisted of the renovation of the parish hall and the area of ​​the small classrooms, was completely damaged, as was the curate's house.

The Salesian community of San Pedro Carchá and the Don Bosco Center, directed by Fr Antonio de Groot, accompanied and supported the inhabitants with the delivery of food and the offer of accommodations to the needy. But aid is still absolutely necessary: ​​after so many days there are still entire villages that have not been reached by rescuers; villages that previously could be reached on foot or with some vehicle can now only be reached by boats.