Ecuador – The Earthquake does not stop Education: Children and Youth return to the Salesian School 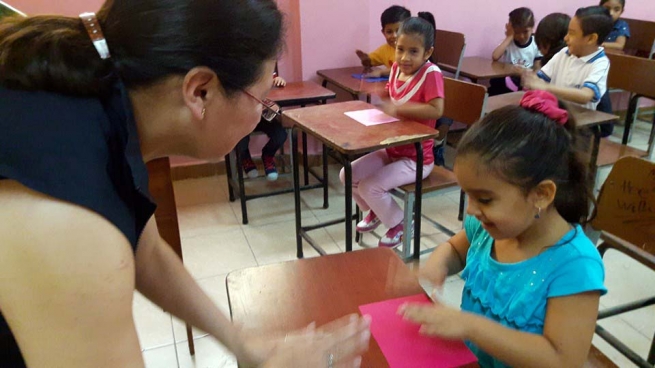 (ANS – Manta) – According to UNICEF data, the earthquake of April 16th destroyed 280 schools and provisionally left about 88.000 children of the areas of Manabi and Esmeraldas with no access to education. After the tragedy, the schoolchildren have gradually resumed their lessons and the 1.200 students of “San José” Salesian Educative Unit in Manta last Monday, June 13th, restarted their school activities.

From the early hours of the day, the playground of the new building, which was seriously damaged by the seism, started to fill with hundreds of children and teenagers accompanied by their parents. On the first day, the work was mainly focused on ludic-formative and psycho-emotional activities: in the morning for the children, and in the afternoon for the adults.

To accomplish this task, the educative community availed itself of the professional contribution of the psychologists of the Salesian University; the purpose was to help the children to overcome the fear and the emotional trauma caused by the quake, given that memories persist in the minds of children. Finding themselves with their friends they could share their experiences.

Fr. Luis Mosquera, Rector of the Salesian community in Manta, welcomed the students and their parents, allowing the latter to visit the structure and the new classrooms for the students, so that they might see for themselves the security measures that had been adopted and feel serene.

Although the old building and the gym of “San José” School had been demolished, the work of the Salesians in Manta did not stop and it will continue to provide a quality education, after the style of Don Bosco. Next Monday, June 20th, there will be the official opening of the school year 2016-2017.

And while the Salesians and the population thank God for the many manifestations of solidarity, it is important to continue to help reconstruct the educative work in Manta and support those who have been struck by the seism and who still have to face fundamental needs, such as food and water. One thing however is for sure: “no Salesian pupil will stop studying”