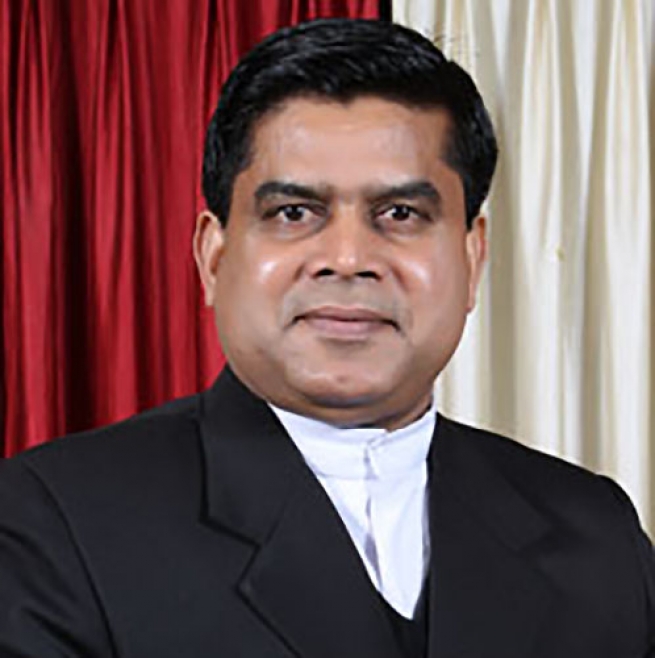 (ANS – Rome) – On 17 December 2020, the Rector Major, Rev. Fr. Angel Fernandez Artime, with the consent of his Council, nominated Rev. Fr. Davis Maniparamben, SDB as the 5th Provincial of the Salesian Province of “Jesus the Good Shepherd”, New Delhi, India (INN) for the six-year period of 2021-2027. The New Delhi Province spreads across nearly half of India, encompassing 9 States and 2 Union Territories of India. The Province with 204 Salesians is set to celebrate 25 years of its foundation in January (1997-2021).

Fr. Davis Maniparamben professed as member of the mother Province of Kolkata and has been part of the Delhi Province from its inception. He can speak and write Hindi and Bengali in addition to English and his mother tongue Malayalam.

Fr. Davis was born on 29 June 1961 of John and Elizabeth. Both his parents have gone to their eternal reward. Two of his sisters (Sr. Annie Joice and Sr. Maria Pushpam) are consecrated religious, in the Franciscan Clarist Congregation (FCC). His father, late John Maniparamben was a freedom fighter in the Indian national struggle for freedom, having been a Second World War veteran and later a soldier in the INA (Indian National Army) founded by the great freedom fighter, Shri Subhash Chandra Bose. Fr. Davis did his high school studies at Don Bosco School, Mannuthy, Kerala where he came in contact with the Salesians of Don Bosco.  He was fascinated by the work of the Salesians for the education of young students. He became a member of the Society of Salesians of Don Bosco on 24th May 1981.  He was ordained a priest on 30 December 1990 at Ollur, Kerala.

His education in different parts of the country (Trichur, Sonada, Shillong, Kolkata, Bangalore) has expanded his vision and ability to understand people and situations. He is a graduate with English Honours and holds a post-graduate degree in Counselling Psychology from Bangalore University. He has a professional degree in Education (B.Ed) from the University of Calcutta.

Fr. Davis Maniparamben became a Headmaster at Don Bosco School, Liluah (West Bengal) in the year 1991.  Since then, he has been in the educational field bringing out the best from his staff and students in places like Kokar, Kullu, and Alaknanda. He also taught at Jokbhala and guided the Salesian community Jabalpur. Since 2019 he is the Rector and Principal of Don Bosco School Alaknanda, Delhi. In 2019 the Delhi Minority Commission awarded the School, “Outstanding School Award.” For a time, he was among the panel of Inspectors for Council for the Indian School Certificate Examination. He is a member of the Peace Committee of the Delhi Minority Commission.

In addition to the long years of experience in Schools, he also has had the experience of being a Parish Priest at Hatia, Ranchi. At the Provincial level, he has served 4 terms as a Provincial Councillor (1997-2003 and 2008 – 2014). Currently, he is Provincial Delegate for Past Pupils and ADMA. In the past, he has been at various times, Provincial Delegate for Formation, Education & Culture, and Groups & Movements. He has also served as a full-time Youth Ministry Coordinator of the Province. He was elected by the confreres of the Province to be a delegate of the Province at the 28th General Chapter of the Salesian Congregation, held in 2020.

Fr. Davis Maniparamben who is known for his love for young people, for his dynamism and for his ability to create synergy among groups will be taking up the responsibility of being the Provincial of New Delhi Province from Rev. Fr. Jose Mathew Koorappallil, SDB who has led the Province from the front in the last six years, with great enthusiasm, courage, and organizational ability.