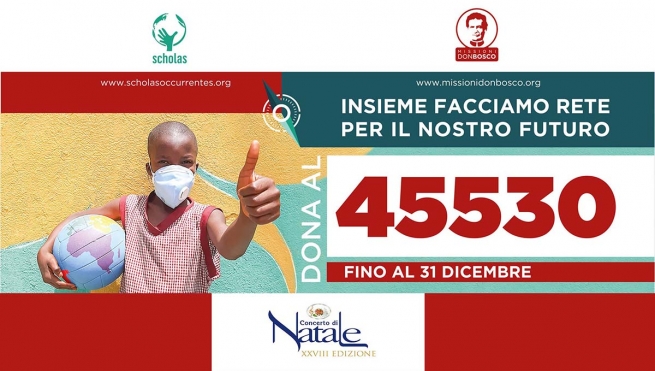 (ANS - Rome) - This year too, for the 28th time, the traditional artistic-solidarity event of the "Christmas Concert", promoted by the Congregation for Catholic Education, is being renewed. The concert supports the activities of the Salesian Mission Office, "Missioni Don Bosco", of Turin and of the Pontifical Foundation "Scholas Occurrentes", which this year joined in the common project "Together we network for our future!" intended to give concrete answers to the social and educational emergency caused by the ongoing pandemic.

The show, recorded on 12 December last, will be broadcast on Italian TV Canale 5 on the evening of 24 December and will act as a driving force for donations that can be sent right now, and until 31 December, through the solidarity number 45530 - and that will be used to support the charitable projects of Missioni Don Bosco and Scholas Occurrentes designed to help those most affected by the pandemic.

In this year that is about to end, "Missioni Don Bosco" has supported projects in 55 countries, reaching around 10,674,000 people. The action is made up of health awareness programs, the distribution of food and masks, educational assistance and hospitality for the homeless. Aid was concentrated in the areas most affected by the pandemic, through widespread intervention in many areas of the global South.

Given the persistence of the pandemic, the commitment will be renewed in the new year. Bro. Giampietro Pettenon, SDB, President of "Missioni Don Bosco", explained:

“We Salesians have many schools where we welcome thousands of children, who obviously cannot attend them at this time because the pandemic prevents it. For many of these children, it means giving up the only real meal of the day ... We have carried out, wherever possible, a door-to-door delivery of food packages, to help the poorest families feed their children.

I am thinking for example of the children exhausted by hunger who in Madagascar, in the final phase of the morning, would fall asleep in the classroom: at home they ate breakfast at home with a cup of hot water! Or to India, where many migrant workers walk hundreds, thousands of kilometers to return home. Where there is a Salesian house, the confreres opened the doors and welcomed these people, fed them and were able to give them some rest.”

Furthermore, this year the first edition of the "Christmas Virtual Race - Run for Charity" will be launched during the concert, a moment dedicated to sport and solidarity, born from the collaboration between Prime Time Promotions and the Amateur Sports Association "Corsa dei Saints". The race started on Saturday 19th and runs until December 31st: through the App downloadable from the Enternow platform, runners will be able to compete along their favorite routes and compete with others in a virtual way.