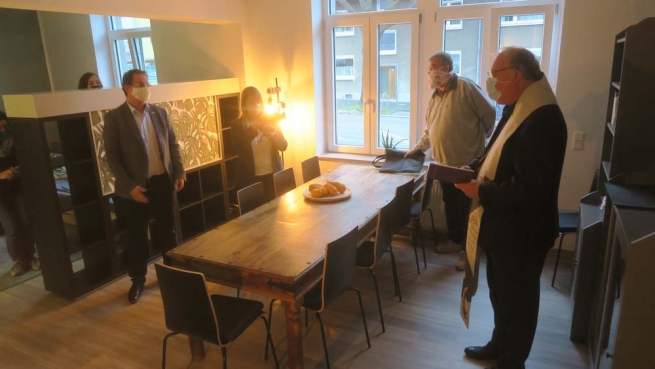 (ANS - Essen) - On Theodor Hartz Strasse in Essen, at number 21, in the immediate vicinity of the Salesian house, there is a house that for many years, until 2015, had welcomed young people in need. After a five-year hiatus, on 25 November the house was re-inaugurated, as it is now being carried out under a new aegis and through a collaboration between Salesians and the local Caritas. And in a few days its guests are preparing to experience their first Christmas in this new home for disadvantaged young people - a home that still awaits an official name, but which will find one together with its young guests.

The house is owned by the Salesians of Don Bosco, who in recent years, and with great sacrifices, have completely renovated it. The result, however, was worth it: it is now a beautiful home for seven children, who can develop new perspectives for the future here.

“During renovations there were continuous delays and in the end it became clear that we could not do without a complete gutting,” explained Fr Otto Nosbisch, Director of the Essen work and staunch supporter of the initiative to give a new use to the structure. “Now we are practically dealing with a completely new interior, in the old outer walls.”

Indeed, the result of the work on the old three-storey building, renovated in its central core, is impressive: large common areas have been created, a large kitchen, seven large single rooms, good bathrooms, ample balconies and a beautiful internal courtyard. Also, there is a space for assistants and therapists, offices and meeting rooms.

Even if, according to the agreement, Caritas of Essen will manage the activities, the Salesian spirit will remain an integral part of the life of the house. “This was a particularly important point for us: with the Don Bosco Club, the daily oratory and all the other offers of the Don Bosco Campus, there are many opportunities for action in the vicinity; and with them, also concrete occasions of encounter,” said Fr Nosbisch.

Building furniture together, hiking and a variety of other activities are already planned for the future; while as regards the equipment, colors and furnishings of the interiors - which were blessed by Fr Nosbich on the day of the inauguration - it should be noted that they were all selected by the staff who will animate the house, to have an optimal operating environment for the children's care.

The young residents of Theodor Hartz Strasse, No. 21, will soon be involved in choosing the name to give to the house. Meanwhile, accompanied by Caritas workers and wrapped in the Salesian spirit, they can rediscover a healthy trust in life and in God's help.