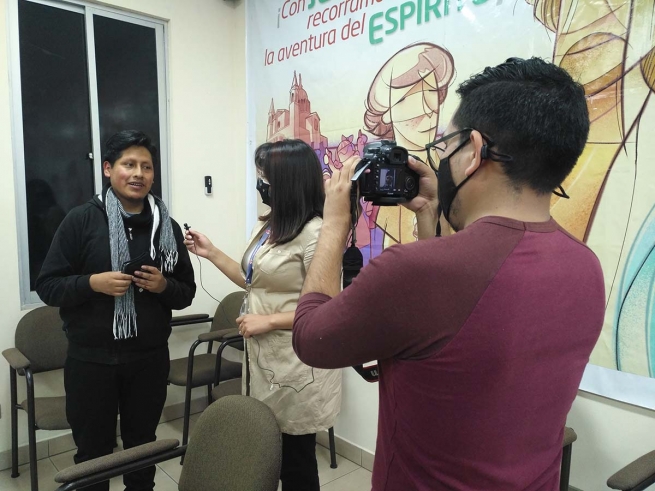 (ANS - Cochabamba) - "I would like to have a million friends and thus be able to sing louder" was the initial expression with which Fr Gildásio Mendes dos Santos, General Councilor for Social Communication, greeted the 15 participants in the first meeting of young people who chose to give testimony of life in this time of pandemic from radio and social networks. The meet was held in Cochabamba at the headquarters of the Salesian Province of Bolivia (BOL) on 16 and 17 December.

This initiative was launched from the Social Communication Office of the Salesian Province of Bolivia to support and amplify initiatives and youth testimonies in community radio stations and in Bolivian social networks. But it was the impulse of VIA DON BOSCO that made it possible to materialize within the project called "Te Falta Barrio – TFB", you miss, long for, the neighbourhood. With this activity, through the year, two broadcasts were produced per month and a community of young people was formed, people who were able to interact thanks to this new platform.

TFB seeks to convey experiences of personal improvement and initiatives based on the guidelines of Catholic doctrine. The project started with a monthly social networking program and is currently made up of young people broadcasting from social networks, community radios, or starting businesses and others who just want to share their life stories. With the passing of the days and the pandemic the program has undergone a profound transformation, becoming a brand, a style and a way to bring together youth initiatives in the media and social networks.

Fr Juan Pablo Zabala, BOL Provincial, also spoke at the event, thanking the young people and asking them not to stop announcing the Good News. “Young communicators have the gift of the word which is transformed into image, sound, multimedia and encounter. Today this word is meant to be embodied, which is embodied with creativity. Today God is walking among us and we want creative communicators who announce Him.”

During the meeting, the young evaluated the work carried out during the year and also made suggestions for improving the sectors and how to reach more people. The "Te Falta Barrio" project is being consolidated thanks to the commitment and contribution of several people who have collaborated with suggestions, theatrical training and technical support. Some of the organizations involved in the initiative are the Bolivia Projects Office (OFPROBOL), the audiovisual service of the Bolivian Catholic University of Cochabamba, the "Hecho a mano" theater team and, above all, the creativity and predisposition of young people.

“I wish everyone a happy Christmas and a new year full of hope, thank you all for your wonderful work of communicating through the radios. The Salesians of Bolivia have the leadership in this field within the Salesian world. Many thanks to the young people, lay people and Salesians for this wonderful work,” said Fr Gildásio Mendes dos Santos.