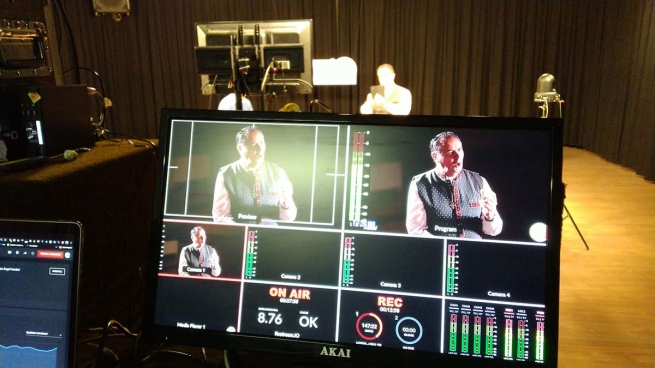 (ANS - Rome) - On the afternoon of 26 December at the Faculty of Communication Sciences of the Salesian Pontifical University in Rome, the Strenna 2021 of the Rector Major was launched live for the first time in history. The presentation of «Moved by hope: "See, I am making all things new" (Rev 21,5)", via a live interview with the Rector Major of the Salesians of Don Bosco, Fr Ángel Fernández Artime, was broadcast on the Facebook channel of the ANS news agency simultaneously in 5 languages (Italian, Spanish, English, French and Portuguese).

The simple program moderated by Fr Silvio Roggia, from the Department for Formation, was introduced by the traditional 15-minute video of the Strenna 2021, produced by the Department of Social Communication, ANS and the IME Comunicazione Production Team, and was broadcast on their respective FB channels in 5 languages. The program continued with the 10 questions posed by the moderator to the Rector Major and concluded with the answers of the 10th successor of Don Bosco to some of the numerous questions relating to the Strenna published on the Facebook page by members of the Salesian Family from all five continents. During the interview, the Rector Major gave the whole Salesian Family words of hope and commitment:

 Grow in humanity, learn the essentials of life and have a broad, far-sighted outlook.
 Form yourself to live hope, bring it where it is and where it acts. Hope is not just looking forward, it is already here in everyday life, and the Salesian Family is called to make concrete choices to be close to the young, the poor, and the excluded.
 Nurture being loved by God forever. Bear witness to everyone who is the reason for Hope, the God of Jesus Christ and His Gospel.
 Walk together as the Salesian Family to continue to fulfill Don Bosco's dream today in the certainty that it is God who "is making all things new".

“Hope is the new light that is reflected through our eyes.
LET'S ILLUMINATE THIS WORLD TOGETHER”.

In the first hours of its launch, there were already thousands of views of the Strenna 2021 video and on Facebook over 183,000 people checked in with 1,186 comments and 776 shares.

Strenna 2021: Moved by hope - video (15 minutes)
Facebook: Live presentation of the Strenna 2021 by the Rector Major