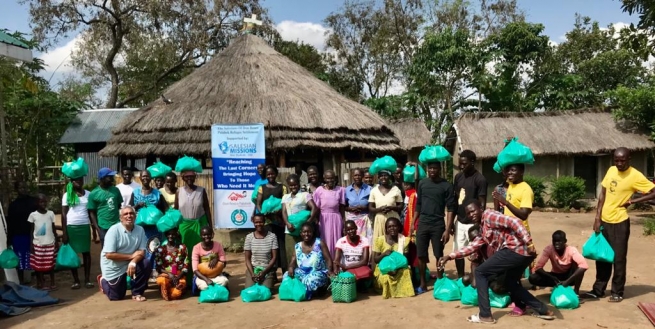 The Palabek refugee reception camp currently hosts more than 56,000 refugees and asylum seekers. It was officially established in April 2016 to reduce congestion in the larger refugee camps in the northwestern part of Uganda. Several agencies are involved in the provision of food and education within Palabek. While some have left due to the pandemic, the Salesians have remained.

Even before COVID-19, living conditions in Palabek were not easy. Food distribution was scarce and there were difficulties in accessing clean water. With the arrival of the pandemic, everything has become even more complicated. The amount of food delivered to refugees once a month was reduced by 30%, classes and activities were suspended, and episodes of violence, alcoholism and teenage pregnancies began. The United Nations Refugee Agency (UNHCR) warns that, unless urgent measures are taken to address the situation, levels of acute malnutrition are set to rise, especially among children.

“With the support of Salesian Missions we were able to make about 800 bags of food in November,” said Fr Ubaldino Andrade, a Salesian missionary who works in Palabek. “We'll be able to supply almost the same amount to the Christians in the camp as well as provide blankets, buckets, cooking oil and soap.”
Fr Ubaldino added: “This donation is highly appreciated because there are hunger, malnutrition and other nutritional deficiencies among the refugees. This creates a lot of frustration, anger and other social disturbances. The Salesians distributed many tons of food and clothing, especially to the poorest. During the COVID-19 pandemic, many families were also supported with seeds and agricultural tools.”