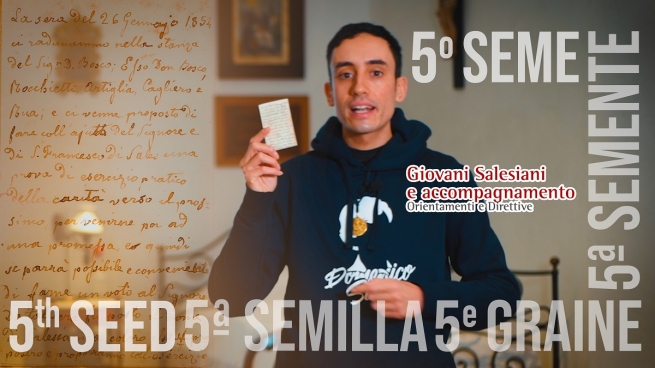 (ANS - Rome) - The process of disseminating "Young Salesians and accompaniment – Orientations and Guidelines" continues and the seed video for January occupies a special place. It is Don Bosco's month: the video begins in his room in Valdocco, where it all began. Kept there now is a small seed measuring 10 x 5 cm, the tiny notebook on which Michele Rua, aged sixteen, wrote on January 26, 1854: “On the evening of January 26, 1854 we gathered in Don Bosco's room; with Don Bosco himself, Rocchietti, Artiglia, Cagliero and Rua. A practical exercise of charity towards one's neighbour, with the help of the Lord and of St. Francis de Sales, was proposed to us; and later to take a promise, if it seems possible and convenient, to make a vow to the Lord. From that evening the name Salesian was placed on those ready to do the same.”

There could be no more effective testimony of how Don Bosco accompanied his young people and how fruitful his walking alongside them was. He welcomed the "five loaves and two fishes" they had to offer and opened in front of them boundless horizons, of which we are now a part.

The accompaniment of every child, of the groups, of the environment is at the heart of youth ministry, supporting the openness to life of anyone who enters the houses of Don Bosco. It becomes the mark of quality of those centers dedicated to the accompaniment of those oriented towards Salesian life, such as aspirants, in all the variety of their forms, and pre-novitiates.

The appeal that Don Bosco makes to us from Valdocco with this 3-minute video message is to recover this treasure. It is a charismatic talent whose modernity was strongly recalled to us by the synod on young people and Christus Vivit. It becomes a responsibility for the Salesian Family that the Church entrusts to us for today. In “Young Salesians and accompaniment” this is the focus from number 109 to 118.

Giorgio (ITA), Kenneth (ENG), Anselmo (PT), Jean Paul (FRA) and Brandon (ESP), who produced the video, leave us three questions with which to welcome the seed, make it sprout and bear fruit. Among them: What is the standard and the 'health' of my province regarding personal accompaniment within the youth ministry, as it usually takes place in the various communities? The concluding caption: “At Valdocco as in Emmaus: walking side by side lights up the heart”.

Here, the link to the video.