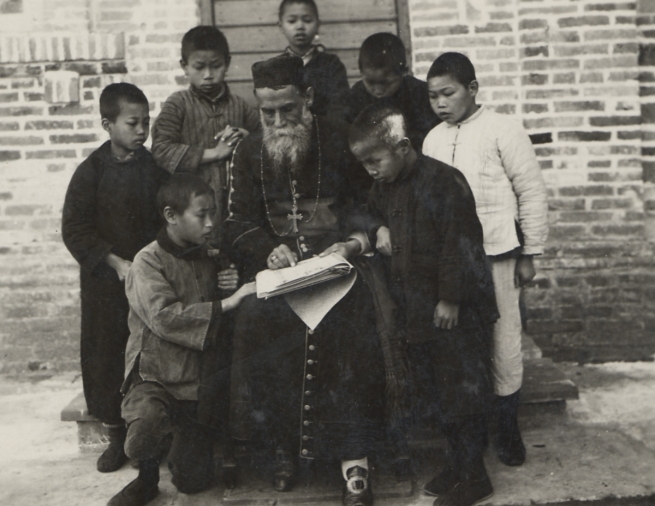 (ANS - Rome) - In Fr Luigi Versiglia, missionary and superior of the Salesians in China, there was always a great desire to acquire the virtues necessary to become a good missionary, convinced that at the basis of every apostolate for souls there must be profound piety, union with God and entrustment to Mary Help of Christians. At the beginning of Lent in 1920 he sent all the confreres a circular in which he summarized his thoughts in five points that became known as the five commandments of the missionary:

1.    The missionary who is not united with God is a channel that's detached itself from the source.
2.    The missionary who prays a lot will also do a lot.
3.    Love souls very much; this love will master all industries to do them good.
4.    Always aspire to the best in and of everything; but always be satisfied with what happens.
5.    Without Mary Help of Christians, we Salesians are nothing.

In the 1920s the Holy See decided to elevate the Salesian Mission in China to an Apostolic Vicariate and despite the fact that Fr Versiglia, in the immense humility that distinguished him, considered himself lacking any ability and virtue and the necessary strength to assume roles of responsibility and with his insistence on being exonerated from leadership positions, he was appointed Bishop and Apostolic Vicar of Shiu-chow.

His episcopal consecration took place on 9 January 1921 in the cathedral of Canton by the hands of Mons.De Guébrand, assisted by the Bishops of Hong-Kong and Swatow and in the presence of the Superiors of the various Missions, representatives of the French, Italian and Portuguese, Spanish, and American clergy, and a crowd of faithful that had flocked from all over, as well as from the "Schola Cantorum" of the Macao Orphanage. “In verbo tua laxabo rete” (At your word I will let down the net): this is the motto chosen by Bishop Versiglia.

On becoming bishop, Mons. Versiglia did not change his habits; he continued to sacrifice himself for his confreres and for the Chinese and lent himself to any task, role or service: typographer, sacristan, gardener, house painter, even barber. When the Salesians arrived in Shiu-chow, the Mission owned nothing but a poor residence in a narrow street that ran along the ancient city walls but, over the years, Bishop Versiglia worked to raise funds and, thanks to his zeal and innate gifts as an architect, he designed schools, residences, small churches, a cathedral, a shelter for the elderly, a dispensary, and their construction followed.

In 12 years of mission, from 1918 to 1930, Bishop Versiglia was able to work wonders in a land not always favorable to Catholics. The intrepid bishop stopped before nothing, not even the famines, epidemics, the defeats that presented themselves to him and his collaborators, not always humanly rewarded: apostasy, slander, abandonment, misunderstanding, cowardice ... But it was all overcome thanks to prayer, intense and constant. A donation in the style of the Good Shepherd that will be sealed with the blood of martyrdom on February 25, 1930.