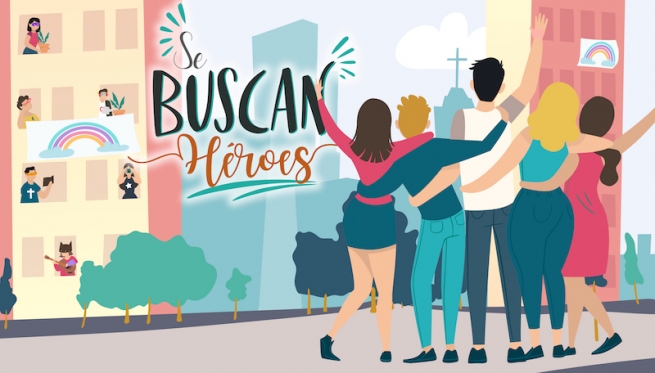 (ANS - Madrid) - At the beginning of 2021, with the feast day of Don Bosco already on the horizon, the Vocation Campaign of the Salesians of the "Spain - St. James Major" (SSM) Province arrives: "In search of heroes". A proposal that comes from the call made by Pope Francis during the pandemic's hardest days: "ordinary people – often forgotten people – who do not appear in newspaper and magazine headlines nor on the grand catwalks of the latest show, but who without any doubt are in these very days writing the decisive events of our time."

The vocation campaign is part of the annual pastoral campaign and looks for the new kind of hero that is emerging. The objective is to help young people, in the first place, to commit themselves as authentic heroes, who by God and with the power of the Spirit are capable of giving their lives with generosity and courage: “We are looking for heroes who are not afraid of showing that love is the greatest of their powers”, states the video that illustrates the campaign.

Heroes in flesh and blood, like you and me, who perform simple actions, but which leave their mark. Heroes capable of fighting battles without using weapons. Heroes who put their commitment and efforts at the service of others. Committed, brave, selfless heroes. Who are capable of taking risks for a better world. Heroes who trust older people. Firm, who do not give up. Who make themselves available and take care of the most vulnerable. Heroes who educate their gaze and their heart. Who protect all life and create opportunities to discover God.

In addition to the promotional video, various materials were prepared to deepen the proposals of the vocation campaign: thoughts of the “Salesian Good morning”, celebrations, testimonies, dynamics. All the resources, available online, try to contribute to the promotion and consolidation of an authentic vocational culture.

José Carlos Sobejano, Provincial Coordinator of Vocation Animation activities, invites all the Salesian Houses of the Province to follow up on the campaign, “articulating strategies, facilitating times, coordinating those responsible and environments, encouraging the different groups of the Salesian Family. Ultimately sharing and spreading the vocation campaign.”

As the video closes: “This year a new type of hero is emerging. That hero is you.”