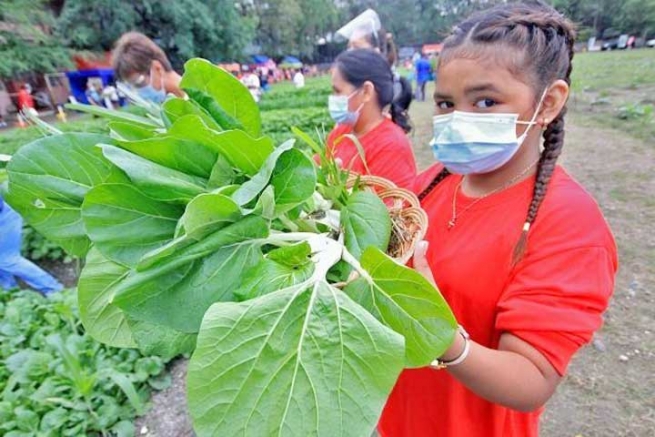 (ANS – Manila) – On Sunday 3 January, the Don Bosco Tondo – guided by Rector Fr Gaudencio Carandang, Jr – a vegetable urban farm project - was featured by most of the mainstream Filipino media, like Manila Bulletin, Manila Times, CNN Philippines, GMA Network and Philippines Star. Thanks to the courageous pandemic solidarity move of Don Bosco community in Tondo the football field got a new face. During the last 50 years the soccer field was always full of children and young people and during these difficult times was transformed into a vegetable farm.

The good and surprising news in just a few words: the residents in Tondo, Manila, harvest the vegetables they planted under the “Buhay sa Gulay” Harvest Festival project led by the Manila LGU, Department of Agrarian Reform, and the St John Bosco Parish Church on Sunday, January 3, 2021. The whole process, from land preparation to planting and propagation, was done by 17 different barangays (small districts).

The “Buhay sa Gulay” project is being implemented by the Department of Agriculture (DAR) in partnership with the “Don Bosco Parish – Tondo”, and the local government of Manila, where the 8,000 square metre football field was converted into an urban vegetable garden to plant varieties of vegetables to benefit families and residents of 17 barangays around the parish.

The project started in October 2020, where six agrarian reform beneficiaries in Cavite (province), who are known as farmer-scientists, volunteered to teach the resident-beneficiaries of Tondo the proper way of urban vegetable farming. Apart from the training, seedlings, fertilizers, vermicast, and other farming materials were provided by the provincial office of DAR in Cavite, while the machinery used were borrowed from the Department of Agriculture. Aside from the pick, harvest and pay promo, cooking contest, farmers products booth contest and raffle of prizes will be conducted.

During the pandemic, 16% of Filipino families say they are not poor and some 7.6 million Filipinos declare they suffered hunger over the past 3 months. In this context, this small but first urban vegetable farm in Manila is becoming a good model for others in our difficult times.