Laos – Certificates and medals of honor for Salesian Family representatives 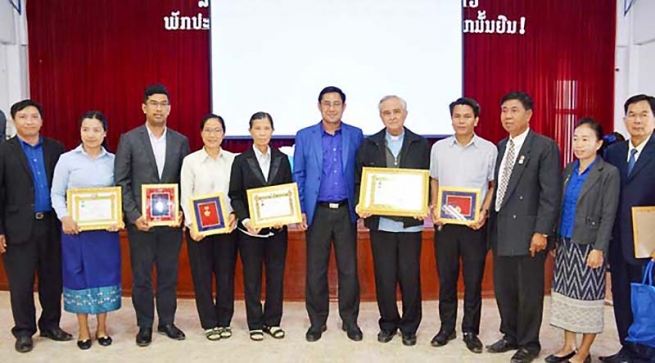 (ANS - Vientiane) - On Wednesday 6 January 2021, on the day of the Solemnity of Epiphany, at the headquarters of the Youth Union of Laos, Fr Patrick Maccioni, Rector of the Don Bosco  Vocational Training Center for Youth in Vientiane, Laos, received the III degree Medal with the official signature and stamp of Bounnhang Vorachith, the President of the Lao People's Democratic Republic. Two religious of the Daughters of Mary Help of Christians, Sister Tuong Van and Sr Thuy, were also awarded with similar awards.

The awarding of these medals and certificates from the Laotian institutions to the religious sons and daughters of Don Bosco was intended to represent a public sign of appreciation for the great work that the “Don Bosco” Salesian Foundation of Thailand has been doing to help the poor and needy young people of Laos.

The manager of the Thai company "Rach-Lao" also received a medal for sponsoring scholarships to help young people start their business.

“Let us thank the Lord and Don Bosco that our work for poor youth is known at the government level. We hope that these signs of appreciation will bear fruit for the development of our Don Bosco Center and in the land of Laos, where many young people are still waiting for Don Bosco,” said Fr Maccioni on the occasion.

The work of the Salesians in Laos began on 24 May 2004 under the guidance of Fr Tito Pedron and Sanya Boonprasert, a Past Pupil of Don Bosco, through a first workshop on the repair of small vehicles. This activity was called “Mitr Samphan”, and was run by five young Laotians who were Past Pupils of the Don Bosco Technological College in Bangkok, Thailand. Later, that first workshop was expanded and became the Don Bosco Vocational Training Center at its current location.