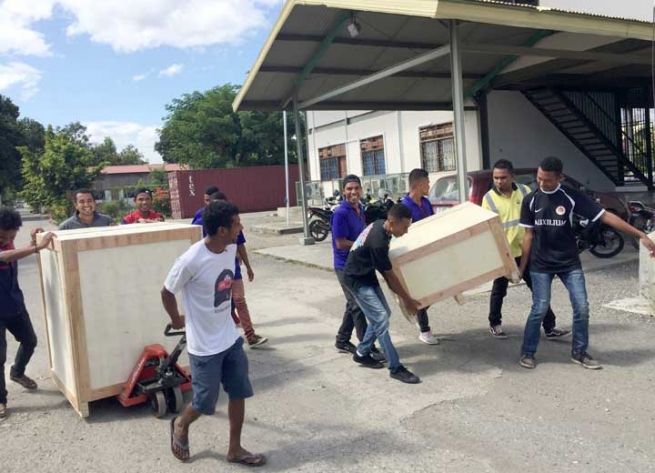 (ANS - Dili) - Thanks to the involvement of many willing people, primarily Salesians and Past Pupils of Don Bosco, an uninterrupted flow of solidarity and generosity has been generated in recent years, and especially in 2020 - already 10 containers! - that from Hong Kong and Macao, Province of “Mary Help of Christians” (CIN), has benefited and continues to benefit thousands of young people from East Timor (TLS).

In 2018 the Salesian Fr Francis Hung, from the CIN Province, took part in the Convention of the Association of Past Pupils of East Asia, which was held in East Timor, and was able to verify some of the difficulties the Salesian mission had to face in that country. So, once back in Macau, Fr Hung collected a large number of theological and philosophical books, equipment for mechanical workshops, and about a hundred computers and uniforms, which he sent with a first container to East Timor.

In 2019 the second container left, containing over 10,000 T-shirts made available by Past Pupil Stephen Mok and conveyed thanks to the coordination of another Past Pupil, Michael Eng.

And at the end of 2019 the past pupil H.P. Chan was moving the headquarters of his factory from Shenzhen to Thailand, leaving a large amount of factory surplus unused, in particular some very precious computer numerical control (CNC) machines, which are extremely useful in industry.

On learning about this, the same team of Salesians and Past Pupils, after having made an assessment of what could be useful and after dealing with an increase in costs due to the size of these machines - which required uncovered containers - loaded another seven containers, which arrived at their destination in summer 2020. In addition to the CNC machines, there were desks, cabinets, workbenches, hydraulic forklifts, projectors, microscopes, chairs, fans, and more.

The last container arrived in East Timor again in the summer, but with a load aimed primarily at facing the pandemic: 300 thousand masks donated by Past Pupil Andrew Chiu, as well as forehead thermometers, computers for distance learning and many other items.

"I want to express our sincere gratitude and our thanks to Mr. Michael Eng and Mr. Stephen Mok who organized the Past Pupils of Don Bosco in Hong Kong to support the Salesian works in East Timor. And I would also like to thank Fr Francis Hung, SDB, who is the main author of the organization of the Past Pupils in this charity work in East Timor," wrote Fr Adriano de Jesus, SDB, who collaborated in the organization of the expeditions from the Timorese side in one of the letters of thanks sent to the Past Pupils and to the Salesians of Hong Kong and Macao.

To Mr. HP Chan, who donated the CNC machines, Fr de Jesus wrote a specific letter, defining himself "moved by the act of generosity and kindness you have shown us" and assuring that "the 'CNC machines' will make a huge difference in the lives of our students."