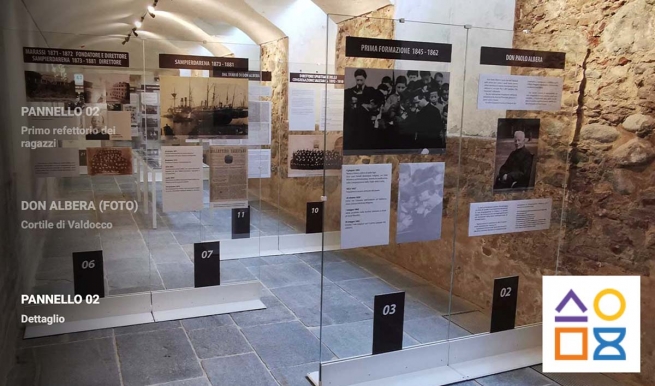 (ANS - Rome) - The Rector Major, Fr Ángel Fernández Artime, has promulgated 2021 as a year dedicated to Fr Paolo Albera, the Successor of Don Bosco at the head of the Congregation, on the first centenary of his death (Turin Valdocco, 29 October 1921).

In a 12-minute video interview, the lay Salesian Paolo Vaschetto offers us a first, concise and interesting introduction to his life.

Fr Albera is the founder of the Salesian works in France where he was known as "little Don Bosco" for his kind and gentle manner, combined with his spirit of initiative. As a member of the General Council and Fr Rua's representative, he visited the Salesian presences in many parts of the world. Memorable was his trip, which lasted 3 years, to meet the Salesian communities in all the houses of America from the far south, in Tierra del Fuego, to New York.

When, as Rector Major, he found himself with half of the Congregation directly involved in the First World War - about 1,500 out of 3,000 religious called to arms for auxiliary services and also on the front line - his paternal heart found a way to accompany those Salesians with a intense and personalized correspondence. We still have many of the letters that were sent to him from the front. He knew how to guide the Salesian Family with great generosity and sacrifice, urging them to take care of the many orphans, whatever their nationality.

Fr Albera was the inspiration and participant in numerous congresses of Past Pupils and Salesian Cooperators. We must not forget the precious treasure of his spiritual diaries, written not only in Italian, but in French and surprisingly also in English, which allow us to partake of the refinement and spiritual depth of this son of Don Bosco, companion of Michele Magone, who became his successor. He was a great teacher of the spirit, alongside the other Salesian "founding fathers".

Mr. Vaschetto, for many years a missionary in Nigeria and Ghana and now in Rome for a doctorate in Salesian History, in his research in the Central Salesian Archive located at the Salesian Pontifical University, has found a real treasure of photos and documents, with which an exhibition on Fr Albera was created. It will be officially inaugurated by the Rector Major on January 30, 2021, at the “Casa Don Bosco” Museum in Valdocco, but which can already be visited online at the Museum website.

A book, edited by Fr Aldo Giraudo, is being prepared to make known the life and spiritual charismatic heritage of Fr Albera, and will include a short anthology of his most significant texts. It will soon be available in Italian, English, French, Spanish and Portuguese.

The video interview is available on ANSChannel ans the YouTube channel of sdb.org in Italian, English, Spanish, French and Portuguese.