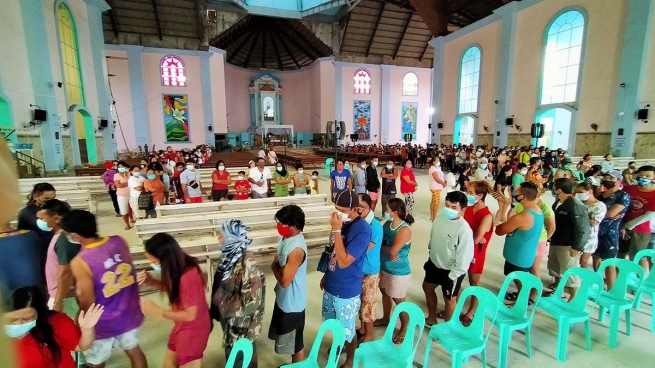 (ANS - Victorias) - A flash flood during the first days of 2021, caused by the Suba river near the Salesian parish "St Joseph Worker" in Victorias, generated, at the same time, numerous problems for many people, but also a magnificent solidarity movement which involved many local societies and benefactors of the Salesian Family.

The problems for thousands of families around Victorias are serious: the destruction of homes and the lack of food. But in the last two weeks no less than 2,600 families have been physically assisted by the Salesian initiatives and many families have even found shelter in the large Shrine of Mary Immaculate in the Cane Town district. On the Facebook page of the Victorias parish you can find out in detail the aid offered and the donations received every day - both in cash and in many basic necessities: boxes of pasta, clothes, blankets, towels, shoes, bags of rice, soap, biscuits, preserves ...

Fr Joriz Calsa, SDB (FIS Youth Ministry delegate) shares: “Blessings of help poured also from some of our friends in Cebu, a lot from the local communities and Don Bosco Past Pupils of different schools. So far, we are on our second week giving food assistance. The past two weeks we have distributed the food packs and other relief good to 2600 families. We focused on this help, since the materials for reconstruction cost a lot and it is beyond our means. We launched an appeal on our St Joseph Worker Parish Facebook page.

There were discussions of our needs during the FIS Rectors meeting, and we received a help from some SDB settings around Visayas and Mindanao as well from some known SDB sponsors.

Our parish initiative was very much appreciated especially when we opened the doors of our large Shrine (Immaculate Conception of Mary, Cane Town) as evacuation center which that very night had 87 persons sheltered under God's guidance. And also we were appreciated for the distribution of food assistance for two weeks until now.

We will be bring also this concern in the social action group of the Bacolod diocese to advocate for whatever can stop the flash floods not only here in Victorias but also in other areas like Silay, Talisay, Bacolod, Magalona and San Carlos City.”

All this relief work is possible only thanks to many parish volunteers who pack the relief goods to be distributed the following day. The packages were initially distributed in the Cane Town Shrine, then from house to house, and still the “graces” of received and given continues.

The Salesian parish of "St Joseph Worker" of Victorias extends over a rather large rural area, with a population that for the most part earns their living from agriculture. It is located on the island of Negros, diocese of Bacolod - guided by Bishop Patrick Buzon, SDB - and the Salesian community of Victorias is the first Salesian presence in the Philippines, having been started in 1951.