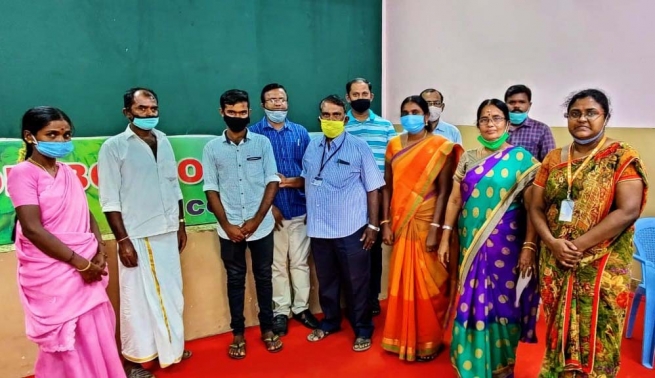 (ANS - Salem) - It was a very moving and intense moment, that of the reunion between the young Meganathan, 22, and his parents Vijaya and Thangaraja, from whom he had been snatched years ago, together with his younger brother, by the owner of a brick kiln, due to a debt. The two brothers were just 10 and 9 years old.

The emotional reunion of the family took place in December at the Salesian house for the most needy minors "Don Bosco Anbu Illam" (DBAI) in Salem, in the presence of Mrs. Uma Maheswari, district director for child protection, by Fr Casmir Raj, Director of the DBAI, and other local authorities.

Meganathan had been forcibly detained, along with his brother Sarath Kumar, due to the debts his parents owed to a powerful man from Sapanipatti. He forced them into child labor in his brick kiln. The family, struck by pain and guilt, had begged the man to release the boys, but the latter had always refused.

The boy described his dramatic experience in the furnace. He and his brother worked hard there for years, in extreme conditions, until a woman took an interest in them. “She asked us if we were interested in studying,” says Meganathan. “I told her that was what I wanted, but that there was nothing we could do but make bricks. Then, a wealthy person called Childline and the next day the police came to rescue us. We were entrusted to 'Don Bosco Anbu Illam', where we were given shelter and a good education,” he added.

Since then, their life has changed. Sarath Kumar, after leaving his studies, found a job as a driver, while Meganathan completed his industrial training and worked for a period as a staff member at DBAI. And it was thanks to a colleague that he managed to get back in touch with his parents. “When we met again, my mother couldn't stop crying,” Meganathan said again.

Now, the next step will be to find a stable job that will allow Meganathan to support his family. Leaving the DBAI was not easy for him: “Here I was encouraged to study and I was given all the support I could,” he recalled. However, he now has a clear idea of ​​what he will want to do in the future: help people in need and provide them with the same assistance he received from DBAI.