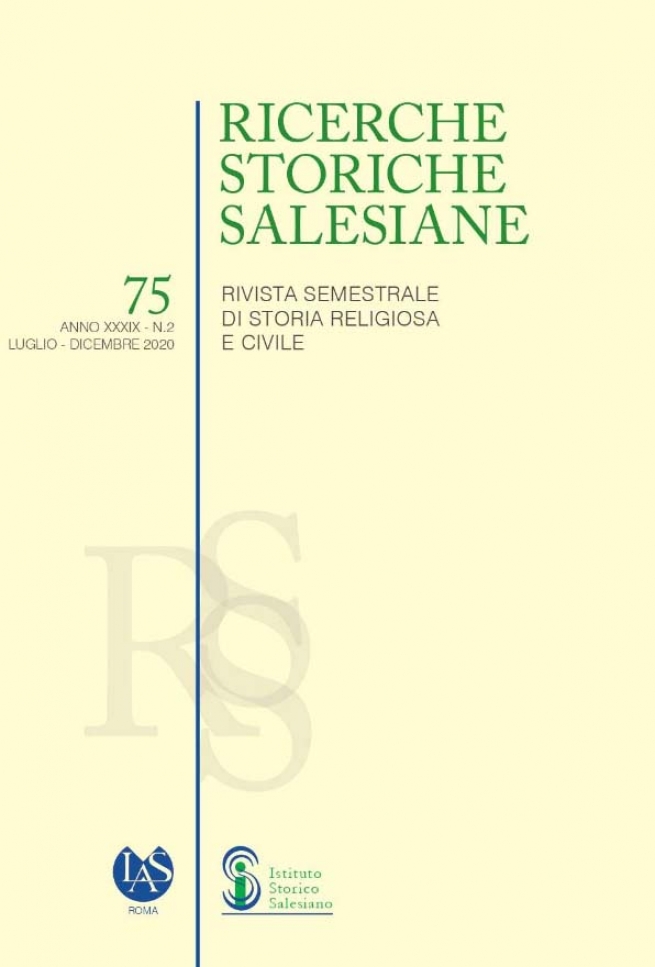 The magazine features three essays in the STUDI section of this issue:

A “Congregazione di carattere esclusivamente italiano? Complessità politiche, sociali, giuridiche pertinenti all'istituzione di un’Ispettoria tedesca dei Salesiani di don Bosco - i.e., Congregation of an exclusively Italian character? Political, social and juridical complexities relevant to the establishment of a German Province of Don Bosco's Salesians - is the study of Joachim Bürkle. The essay, divided into three parts, starts with the beginnings of the Salesian work in Germany, presents the growth of the community during the Weimar Republic, and concludes by focusing on the difficult years of the Salesians in Germany during the period of National Socialism.

The second essay, by Paolo Pieraccini, deals with the theme: Risveglio nazionale arabo e cattolici di Terra Santa: il caso della Società salesiana (1904-1920). Prima parte – i.e. Arab national awakening and the Catholics of the Holy Land: the case of the Salesian Society (1904-1920). Part one. The text presents the difficulties and divisions that developed, also in the Church and in the Salesian Congregation itself, due to Arab nationalism, especially during the First World War.

Sulla fondazione della Congregazione delle "Caritas Suore di Gesù" – i.e. On the foundation of the Congregation of the "Caritas Sisters of Jesus" - is the title of a research paper by Nestor Impelido. This is a study of the historical beginnings of the Sisters of Charity of Jesus (SCG) based on archival materials taken from the central archives of the Sisters of Charity (Tokyo) and the Salesians (Tokyo, Rome). The figures of Fr Antonio Cavoli, Founder, and Fr Vincenzo Cimatti emerge.

In the FONTI - SOURCES sector an original text is presented:

Regolamento della Compagnia di San Giuseppe – i.e. Regulations of the Company of St Joseph. It is the critical edition edited by Rodolfo Bogotto. In the two-year period 1858-1859, Don Bosco increased the boarding school for young students. The artisans section, therefore, decreases in number and takes a back seat. As the months pass, the two youth groups hosted in Valdocco differ more and more in terms of activities, pace of life, level of education, needs, expectations ... To avoid upsetting people, the cleric Giovanni Bonetti is then given the task of animating and assisting the artisans, promotes the Company of St Joseph among the apprentices and draws up the regulations in a shared form.

In the PROFILI sector an article by Thomas Anchukandam is presented: José Luis Carreño Etxeandía (1905-1986) - a profile.

In the NOTA sector there is the contribution of Fr Aldo Giraudo: La valenza storiografica degli epistolari - i.e. the historiographical value of the letters.

The volume is enriched by various REVIEWS and REPORTS of books on Salesian themes.

The issue ends with Repertorio Bibliografico: 2018-2019, edited by Cinzia Angelucci and Stanisław Zimniak.