South Korea – Don Bosco Past Pupil inspires with his love for the Earth: a plogging experience 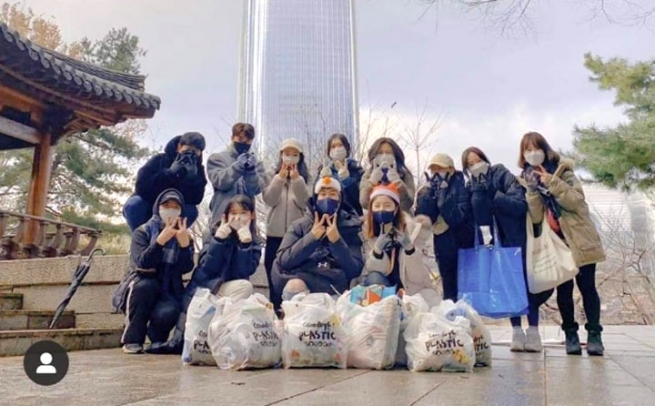 (ANS – Seoul) – Environment and Health are an oft-raised connection today, thanks to Don Bosco Past Pupil, Mr Bae Shin Heng (graduate of South Korea, Gwangju Salesian High School in 2013), presently living and working in Seoul with his elder sister involved in the media.

After his military service, Mr Bae felt strongly that he needed to contribute to the Earth’s climate change and the environment cause along with many of his young generation. He dreamt a bold dream in April 2020: “Within one year I will pick up trash in the public places with another 100 people!” Until now he simply keeps his promise to pick up litter - trash once a week. Our Past Pupil shares his story:

“I’d like to share my story with you if it will also inspire other people to love the Earth. The first question is ‘Why did I start picking up trash?’ A year ago, I was going to travel around the world, which I had prepared to do for 4 years, but as you might know, I couldn’t go because of the COVID-19 pandemic. It was a tremendously tough time in my life. Although I’m a very positive person, I even suffered a form of depression which is called ‘Corona Blue’.

At that time, I needed something to overcome my depression. So I just went running which is one of my hobbies. But that day, I saw trash on the street. So I just started picking trash up and putting it into a trash can. After doing it, I shared my feelings on Instagram. I was given much praise for what I did. At that time I knew that it was called ‘Plogging’ (see below).

Why do I keep doing it until now? The biggest reason is joy. It’s very exciting and amusing.

When I pick it up a lot, it fills me with pleasure. That’s the reason why I keep doing this.

If we were to force others to do it for the Earth or the Environment, they wouldn’t do it. But Plogging can change your mind, the condition of your body through exercise. It’s not only for Earth, but it’s also for us! I’m firmly convinced it will make your life more enjoyable.

So now we have established a group called ‘People Walking for the Earth’. We walk, run, and pick up, and even donate as much as we walk to different environmental organizations. We’re going to walk for Earth and as far as it is possible for us.”

Of course, like many young adults, Shi Heng has also many other dreams: “While picking up trash at Han River (Seoul) today, I thought it would be nice after this pandemic is over to gather with all like-minded people to eat the food we have prepared, to have a party and sing while playing and to spread this movement among more university students and other young adults.”

According to “Wikipedia”, Plogging is a combination of jogging with picking up litter (merging the Swedish verbs plocka upp (pick up) and jogga (jog) gives the new Swedish verb plogga, from which the word plogging derives). It started as an organised activity in Sweden around 2016 and spread to other countries in 2018, following increased concern about plastic pollution. As a workout, it provides variation in body movements by adding bending, squatting and stretching to the main action of running, hiking, or walking. An estimated 20,000 people Plog daily in 100 countries and some plogging events have attracted over 3,000,000 participants.