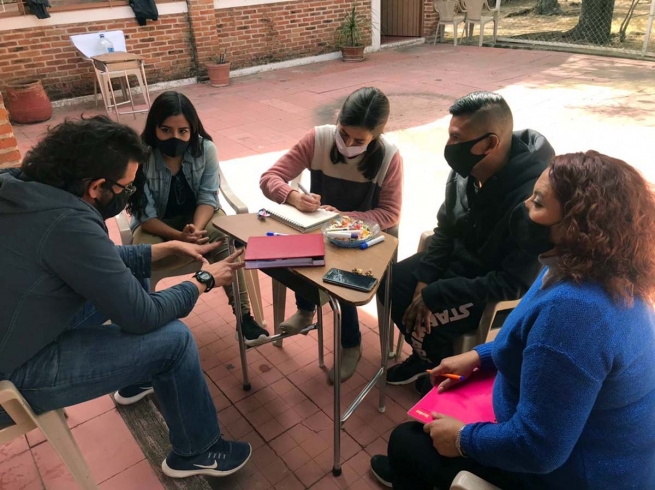 (ANS - Ajijic) - In order to gather all the staff of the multiple projects of the "Patio Incluyente" Model (Inclusive Courtyard), as well as to make the Model known in its entirety and to share good practices, the 1st Provincial Meeting of the educators of the “Inclusive Courtyard” was held in Ajijic, State of Jalisco, from 15 to 17 January, under the coordination of the Planning and Development Office (PDO) of the Province of Mexico-Guadalajara (MEG).

The “Inclusive Courtyard” is a Salesian model of care for young people in conflict with the law developed by MEG. The meeting was attended by representatives of the teams from Ciudad Juárez, Tlaquepaque, León and Los Mochis, as well as the coordination of the PDO.

The set of projects that make up the Model emerged as a necessary response to the situation of violence that has hit the country for more than a decade and has involved thousands of children, adolescents and young people. The Salesian response from the "Inclusive Courtyard" is intended to be an integral response:

-       The second program (Patio 2) has as its objective specialized assistance and support for young people subjected to judicial measures, and includes those "Brigada de la Alegría" projects carried out in the juvenile rehabilitation centers and "Medidas Socioeducativas de Medio Abierto" (Socio-educational measures in an open environment).

-       Finally, the third program (Patio 3), with the project “Construyendo Sueños” (Building Dreams), has as its objective the demobilization and social reintegration of young people who have left criminal groups or are in conflict with the law.

The objective is to deal with this sector of the population starting from Salesian preventive pedagogy, to collaborate, in the light of the Salesian charism and experience, in building a future of peace for Mexico.

The meeting was convened by Fr Juan Carlos Quirarte, PDO Director, with the participation of Fr Felipe Carranza, Provincial Vicar, who opened the activities on Friday 15, presenting the life of Don Bosco and the charismatic origins of the care of children deprived of their liberty. On Saturday there was the participation of Giulia Traversari, of the PDO, who presented the situation of violence in Mexico with concrete data, which speak of young people and their situation. In the afternoon, the coordinator of "Construyendo Sueños", James Areiza Bolivar, offered a space for reflection and exchange of experiences between the various teams, promote the articulation of a network of Inclusive Courtyards among the Salesian works; finally, the Provincial Delegate for Youth Ministry, Fr Francisco Cervantes, closed the Saturday activities with an intervention on the importance of the shared mission between Salesians and laity, making sure that every action does not separate, but unites the educational and pastoral environment.

The assembly ended with Sunday Mass, presided over by the Provincial, Fr Filiberto González.