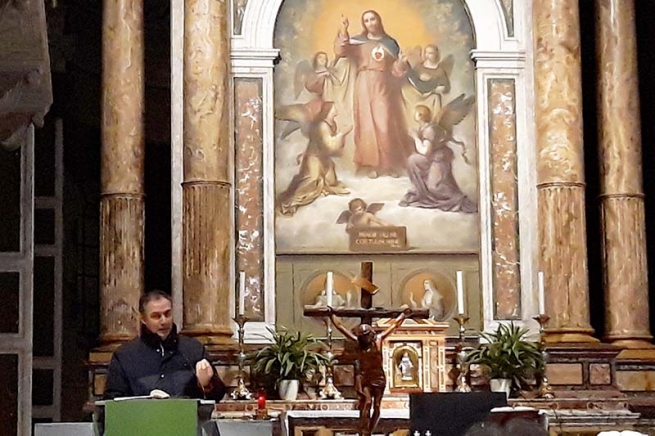 (ANS - Rome) - The winter plenary session of the General Council ends today, 28 January. As per tradition, in view of the closing, the Rector Major, Fr Ángel Fernández Artime, shared the work sustained with the community of the Salesian Headquarters, offering his “Goodnight” thought.

During the 34 work sessions, held in person and in full compliance with health-related safety measures, the Rector Major and his Council appointed six Provincial Superiors: the Provincials of the Antilles, of India-Bangalore and India-New Delhi, Southern Philippines-Pakistan and Vietnam-Mongolia and the Superior of the Vice Province of Myanmar.

Other appointments involved 33 Provincial Councilors, 58 Rectors and four Novice Masters - in the latter case some appointments became urgent because, due to the pandemic, some novices could not leave their countries.

Among the other traditional activities of the Council's plenary meetings, a Provincial Chapter was studied: the India-New Delhi Province.

All these works of "routine, ordinary administration" were always accompanied by times appropriately dedicated "to discernment and serene reflection", underlined the Rector Major.

Also, funds were distributed to the various Provinces with special attention to the support of formation houses so as to accompany the growth of Salesian vocations. In this sense, Fr Á.F. Artime made known some encouraging data: today there are 3,200 Sons of Don Bosco in various stages of initial formation. "Out of four Salesians, three are perpetually professed and one is still temporarily or perpetually professed, but awaiting to be ordained a priest," he explained.

Two reflections were shared by the Department for Youth Ministry: one at the end of the long work carried out in recent years on the theme of Youth Ministry and the Family, the other on Salesian works under lay management.

As for the Department for Formation, they brought the theme of Salesian spiritual accompaniment to the Council in relation to the various stages of formation.

The Department for the Missions focussed on the preparation of missionaries, especially in this era when travel is extremely difficult.

The Rector Major concluded his thoughts by expressing his “sincere and heartfelt thanks” to all the members of the Salesian community for their generous service.