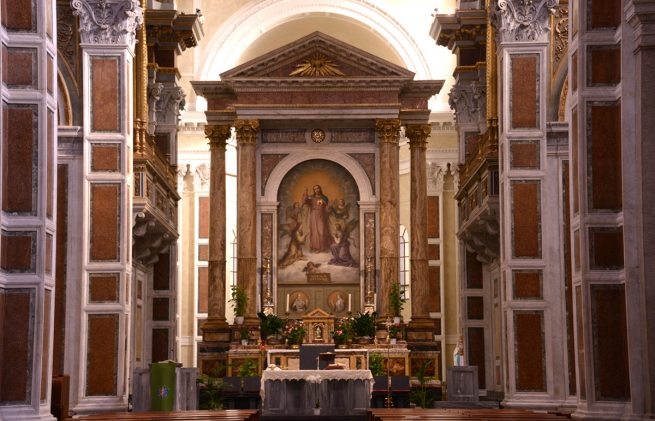 (ANS - Rome) - On the occasion of the feast day of Don Bosco, next Sunday, 31 January, the Holy Mass will be broadcast live from the Basilica of the Sacred Heart of Jesus in Rome, located in the same complex that today houses the Salesian Headquarters, on Italy's top channel, RaiUno: at 10:55 am - UTC + 1. The Rector Major, Fr Ángel Fernández Artime, will preside over the celebration, while the liturgical animation will be provided by a representative of the choir of the Salesian Youth Movement of Central Italy, directed by Fr Francesco De Ruvo, SDB.

It is the first time that RAI TV, Italian state TV, live broadcasts Mass from the “Sacro Cuore di Gesù”, the church that Don Bosco himself had had built at the cost of many sacrifices; and it is also the first time that a Mass of the Rector Major, Fr Ángel Fernández Artime, for the Feast Day of Don Bosco has been broadcast on Rai.

The Eucharistic celebration, directed by Gianni Epifani and with the commentary by Elena Bolasco, will be accompanied by an episode of the program "A Sua Immagine" (also on RaiUno, starting at 10:30) which will also present themes, works and prominent Salesian figures.

At a time of global difficulty due to the pandemic, the live Mass on the first Italian national network will be a good opportunity to spread the message of hope which, starting with Don Bosco, is being carried forward by thousands of people of the Salesian Family throughout the world.