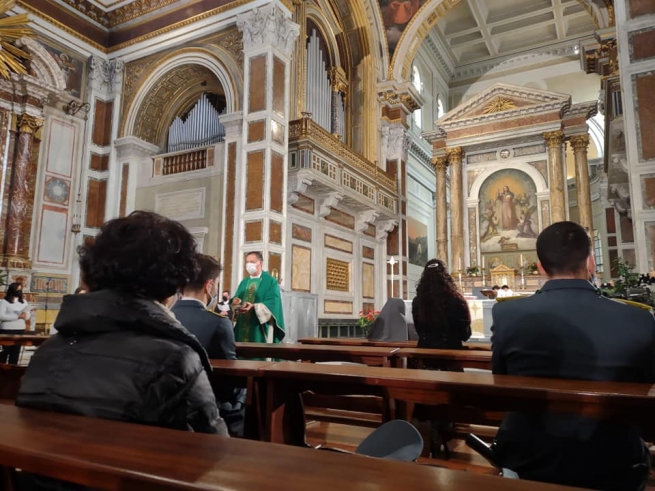 (ANS - Rome) - It was a weekend full of activities for the Rector Major, Fr Ángel Fernández Artime. On the occasion of the Feast Day of Don Bosco, of which Fr Á.F. Artime is X Successor, the whole Salesian world, and beyond, looked to him to receive his charismatic word. The busy schedule of commitments, however, did not distract from the essential: spreading the example of life of the Founder as an authentic man of God, at the service of men.

Starting Friday 29 January, the Rector Major was involved in a long chain of events. He left Rome and arrived in Turin in the afternoon, where he presided over Vespers in Valdocco and animated a meeting with the local community. Moreover, on the same day, a long interview was published on Vatican News that Fr Á.F. Artime had granted Gabriella Ceraso the day before, in which he touches on numerous themes: from the pandemic to education, from brotherhood to modern youth slavery.

Saturday 30 was the day of the presentation of the exhibition "Il mondo negli occhi", dedicated to the Second Successor of Don Bosco at the head of the Salesian Congregation, Fr Paolo Albera. The Rector Major first presided over the Eucharist in the Basilica of Mary Help of Christians and then the inaugural act at the "Casa Don Bosco House Museum".

Yesterday, on the exact day of the Feast Day of Don Bosco, this year on a Sunday, the Rector Major presided over Mass in the Basilica of the Sacred Heart in Rome, broadcast live by RaiUno, Italy's most popular TV channel, directed by Gianni Epifani and with liturgical commentary by Elena Bolasco.

In his homily, the Rector Major began by narrating the episode of Don Bosco who wept 16 times in his only Mass celebrated inside that church; then, he concentrated his reflection on the figure of Jesus, who in his speaking in the synagogue offered "a new teaching, given with authority" (Mk 1:27) and who, far from speaking from on high, approached the wounded and needy directly. Finally, he concluded by emphasizing how Don Bosco, following the example of Jesus, also spent his life to meet marginalized people and thus bring them closer to God.

The voice of the Rector Major, on this occasion, had a huge echo: in fact, the Mass broadcast by RaiUno was followed in Italy by 2,356,000 spectators, equal to 20.1 share; and the show A Sua immagine (In His image)- which offered a presentation for the Mass and which was entirely dedicated to the figure of Don Bosco and the Salesian works - was seen in Italy by 2,044,000 viewers with a 17.4% share, while the results of viewers from abroad are still being calculated.

The day of celebration did not end with Mass: in the early afternoon, Fr Á.F. Artime granted another interview, this time to the journalist Fabio Marchese Ragona, then broadcast within the Stanze Vaticane religious study program on TGCOM. And another interview was also published in a Spanish online newspaper in recent days.

As per tradition, then, the Rector Major took the opportunity of the Feast Day of Don Bosco to address his traditional message to young people, this year centered on the theme of Christian joy and hope in the spirit of Valdocco.

And, in order not to miss anything or anyone, the X Successor of Don Bosco, for the Feast of the Saint of Youth, sent at least a dozen video messages to various Provinces, groups and communities in recent days. A way to be present and animate as a Father the different realities of the Congregation and the Salesian Family.